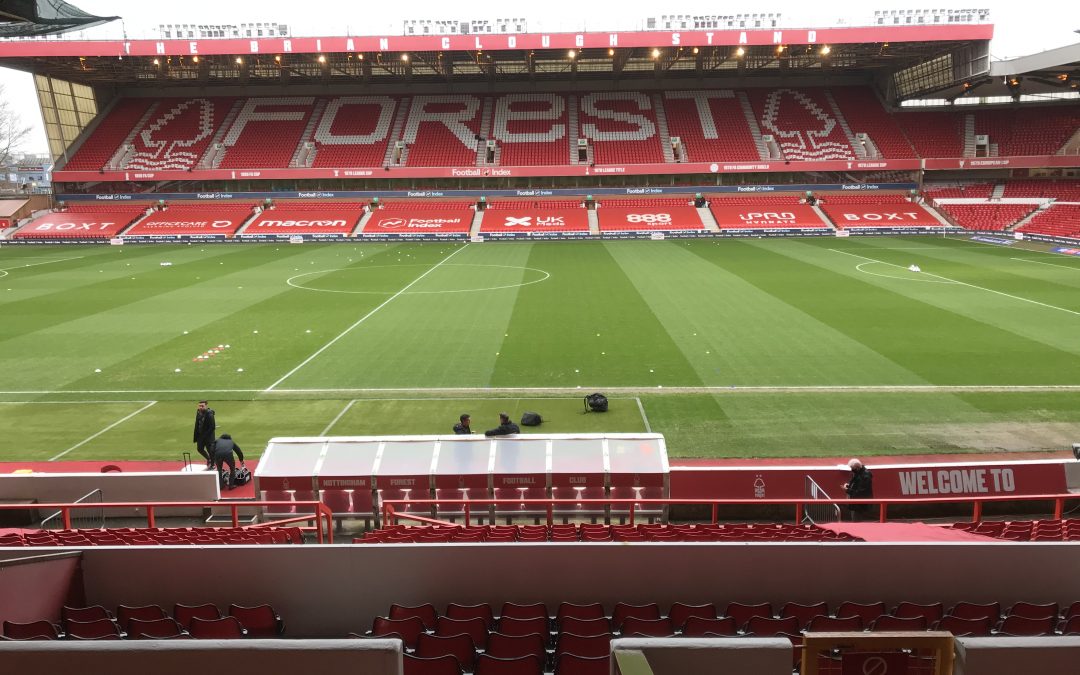 It’s very much a case of new season; new hope down at The City Ground, as summer developments behind the scenes hope to change the trajectory of the club’s fortunes under the ownership of Evangelos Maranakis.

Following Gareth Southgate’s success as England manager in recent years, the Forest job must be up there with the most difficult in English football. Revitalising the fortunes of a once successful club has provided nye on impossible to replicate since Frank Clark’s sterling attempts in the mid-’90s.

Having endured the train crash of Sabri Lamouchi’s 2019/20 campaign, Chris Hughton stepped in to replace the Frenchman only to try and navigate the aftermath of the wreckage. In a fairly lacklustre season, Hughton’s initial influence for me has been a tad disappointing. That’s not to say that I haven’t the faith that he can turn fortunes around.

Transfer activity has been fairly tranquil to this point, but in a summer where the majority of the EFL have been reluctant to spend, it feels like once the wheels have been greased, there will be further faces coming in.

A change of strategy on that front has been positive news, and it’s a very warm welcome to Dane Murphy, who has come in from Barnsley. The path that our old enemies have been on in recent seasons has certainly been an enviable one; they’ve played a brand of football that was once synonymous with what we were treated to once upon a time.

Not that Murphy will be on the training pitch, but having interviewed Barnsley ‘Red All Over’ Podcaster Joe Beardsall last season, I won’t hide that it was with a great deal of envy, listening to him speak so proudly about how the club’s strategy under Murphy.

Signing up and coming talent from the lower leagues and watching them flourish in The Championship is exactly what I’d love to see at Forest, given the years of spending big wages on players that had most largely peaked during their careers.

I guess the caveat to that hope is the style of football that Chris Hughton has played so far. It got to the point last season that I found myself not watching, which is a pretty big statement for a fairly avid fan.

Stopping the running away train was achieved by Christmas, and ultimately that was the season objective concluded after such a depressing start. Brice Samba and Tobi Figueiredo were as commanding as ever once Joe Worrall came back in, and Scott McKenna, if we can keep him fit, looks a good acquisition. Full back positions are of current concern, but I think we are better off without Jenkinson, Blackett and Ioannou. The idea of blooding Jordan Gabriel or Jayden Richardson would excite me in honesty.

Not building on that platform, however, was most disappointing, particularly after some much more promising performances after James Garner arrived; we couldn’t kick on enough even to threaten a late surge for the playoffs.

What was more noticeable with Garner’s arrival was that we were moving the ball much more quickly between Cafu and Krovinovic, which gave me the hope that Hughton can find the balance. If we can counterattack on the break with quality, perhaps we can more than surprise a few teams this season and maybe even ourselves as fans.

I’m not entirely sure if this is new territory that Hughton finds himself in at Forest. There isn’t much to spend, and I’m not sure we have the current personnel to play in his tried and trusted method. However, he strikes me as a Wiley old fox, and I’ll still maintain that when first appointed, I thought he was the best on paper since Harry Bassett came in all those years ago. He’s not lived up to expectations so far, but in the right environment, I see no reason he can’t replicate what he has achieved elsewhere in the game.

Fan predictions – “I’d snap your hand off for mid-table. I predict we finish five points off the Sheep” – Ross Allen

Brennan has come off the back of a highly successful season at Lincoln, where he has been allowed to express himself on the left-hand side of the attack.  From what I saw from him at Lincoln, my biggest surprise was how quick he is when he bursts onto the ball in the opposition half.

It was a key feature of his game that he can accelerate past full-backs with ease when making runs in behind or using his first touch to good effect. Of course, it is going to be a big step up for him. Still, as he continues to develop physically, there is absolutely no doubt we have a gifted player on our hands who can strike up an understanding with his teammates, play intricate balls, and, most importantly, weigh in with goals.

Not the finished the article in the final third, Forest have been desperate for a player to contribute further from midfield. It remains to be seen where Chris Hughton will deploy him and whether he will be a starter, but two goals against Port Vale in preseason will certainly have increased those chances. Hughton had kept close tabs on him so he will know plenty about the talent he possesses.

Brennan appears very much a confidence player, and so he will need to be handled in the right way, and the crowd will also need to keep expectations in check.

Alex Mighten, our poster boy of the new Macron shirts, has a big season ahead of him also. Alex has slowly started to get to grips with life in the second tier, and he, too, has developed physically. His pace and ability to go past defenders could be a potent weapon for Forest, if (big IF) we can utilise his strengths.

But so far in his Forest career, I think our style of play has probably curtailed his progress rather than his own performances. Is he a winger? Is he a striker? We aren’t getting the best out of him to date. There is potentially so much more to come, and if we can get him playing consistently, there aren’t many defenders that will fancy facing him on a Saturday afternoon (or a Sunday 4.30 pm kick-off).

Fan predictions “I think a mid-table finish (13th/14th). We’ll  be solid, but with a little bit more going forward, think Mighten could be the star man this season” – Darren Hibbard

In midfield, it feels like this could be the year of Ryan Yates. Ryan has improved a great deal since initially breaking through under Martin O’Neill, and off the pitch, how he conducts himself makes him a true ambassador for the club, and he’s been given the armband on occasion for his rewards.

There is still more needed from Ryan on the pitch, not just to become the first pick at Forest but also in becoming a top-half Championship midfielder. The potential is there, and fingers crossed, further work on the training ground could bear some crucial fruits for us. As a predominately defensive-minded player, his appetite to get into the box could easily have gotten him into double figures last season rather than the more modest two goals he managed.

Fan predictions – “This season looks like it may well be the start of a proper building process. It might mean that we’re looking at an upper mid-table finish at best, but if it means we’re signing quality over quantity, then so be it.
Hopefully, the likes of Mighten and Johnson will emerge as real homegrown heroes, and we can add a bit of attacking excitement to the solid defence we had last season. With the squad yet to be finalised, I’m predicting 12th to 14th finish this time around.” – Chris Slack

Perhaps the most positive news to come out of preseason is the resurgence of Joe Lolley. Joe seems to have had a fairly torrid time in recent seasons with injury and disappointment. Joe has been such an honest player for Forest that it’s fairly evident in his performances when the chips are down. I really hope the extra time to recuperate can give him that extra yard to skip away from players once more. After all, when on song, there ain’t nobody like him.

I’ve always been a Joao Caravalho fan, and it remains to be seen whether he will get an opportunity to impress further or indeed still be at the club beyond the end of August. It still pains me that we have not gotten the best out of our club-record signing, and similarly to Mighten, I think changes out of his control have hampered his progress.

Ultimately, Joao is in control of his own destiny, and he’s certainly not pulled up any trees at Almeria. It’s a crying shame to see talent go to waste after such an encouraging start to his Forest career. What I’d give to be chanting ‘CAR-VAL-HO’ as the season progresses, or; I’d even take see him smiling in a red shirt again. That does, however, feel like a huge shout for it to become a reality.

Up top, it’s pretty criminal that both Lewis Grabban and Lyle Taylor only just managed to get into double figures of goals between them in the last campaign. I feel like a broken record here already, but once more, a style of play to get the best out of both could see them get at least 20 goals between them. For players of their calibre, ten goals apiece should be minimum.

Whether it is too late for Taylor to resurrect his career at Forest, I don’t know, but it would seem a mistake to let him go for now without a replacement. Goals change strikers performances in a moment (we’ve seen that with Harry Kane this summer), so an early goal or two from Lyle and it could be game on for him.

So far, fending off suitors has probably been our biggest success this summer, with Joe Worrall, Brennan Johnson, and Brice Samba still with us. In many respects, it’s some relief that it’s not been more of the same splatter gun thinking from the board this summer.

However, there is a definite need to strengthen the squad, with Ethan Horvath arriving to bring extra competition between the sticks and Danish midfielder Philip Zinckernagel has joined on loan from Watford. Having Premier League quality in the ranks is more than enough to get optimistic about. He’d be a writers dream describing a goal – ‘Zinga from Zincker or a ‘Zincker, Zinck – Ahh’).

James Garner would obviously be a fantastic addition if we can get him on loan once again (come on, James, you know it makes sense).

Low expectations are always a good thing, and with fans back to get behind the boys, who knows where the season can take us? I’m not bothered about marquee signings or talk of promotion; Dane Murphy will not implement his strategy overnight.

I want a club and performances to be proud of and reassurance that we are headed in the right direction. It’s very much a case of over to you, Forest. Wearing a semi-permanent smile from now until May would be a marvellous thing.

With a few more signings, I’ll go with a top half, 9th place finish, with some positive signs of more to come.