Eve Tomlinson, 28, is a Nottingham Forest fan that has been supporting Forest since she was 9 or 10 years old; around the time that she first started to get into football.

Going to a football match isn’t quite as straight forward for Eve as it might be for other people. Eve is on the autistic spectrum. People with autism see the world in a different way and it can be challenging to overcome certain situations that others might take for granted.

Attending football matches can present difficulties from the moment of leaving the house. Routine and familiarity is important for some people with autism and so unplanned changes in a journey or at the ground can cause a lot of anxiety.

Big crowds are not always easy to manage and this can throw up a lot of unpredictable situations. For a lot of people with autism, they will be out of their comfort zones in these types of environments.

Autistic people can be happiest when they’re on their own. It’s not a matter of being rude, it’s just a preference and sometimes it’s easier to manage that way. Being in a big crowd can be tricky especially when it is difficult to understand people’s intentions or how they might say certain things (e.g. being sarcastic).

For instance, the autistic mind can take things literally and when the atmosphere can become rowdy or hostile during a match; this could be difficult to interpret. Is that person being funny or are they being serious? Aggression would be overwhelming from a social perspective for a lot of people at a match but this is amplified further for a person on the autistic spectrum.

It’s also important to mention that the senses can be overloaded once inside the stadium.

Touch isn’t always a nice thing but that can be difficult to avoid in the ground with so many people attending. Noise or sudden sounds can be difficult to cope with at the best of times but if you apply that to a busy football match; it’s a challenge for people with autism to cope with so much that’s going on around them let alone focus on the reason why they are there; to support their team.

The willingness to overcome all of these challenges in supporting Forest on a match day is most admirable.

To help Eve attend the games at Forest, she comes with her carer Amber to make sure that all goes as well as possible although Amber can’t guarantee that Forest will play well!  Eve was a little stressed last week after massive delays had caused her to get to the ground shortly before 2.30pm against Barnsley. Eve had hoped to meet up with people at 10.30am and so this had been difficult for her. She was disappointed that she’d missed the Forza boats sailing down The Trent before the match. She took up her seats in the Trent End and so it was a good job that Forest won! 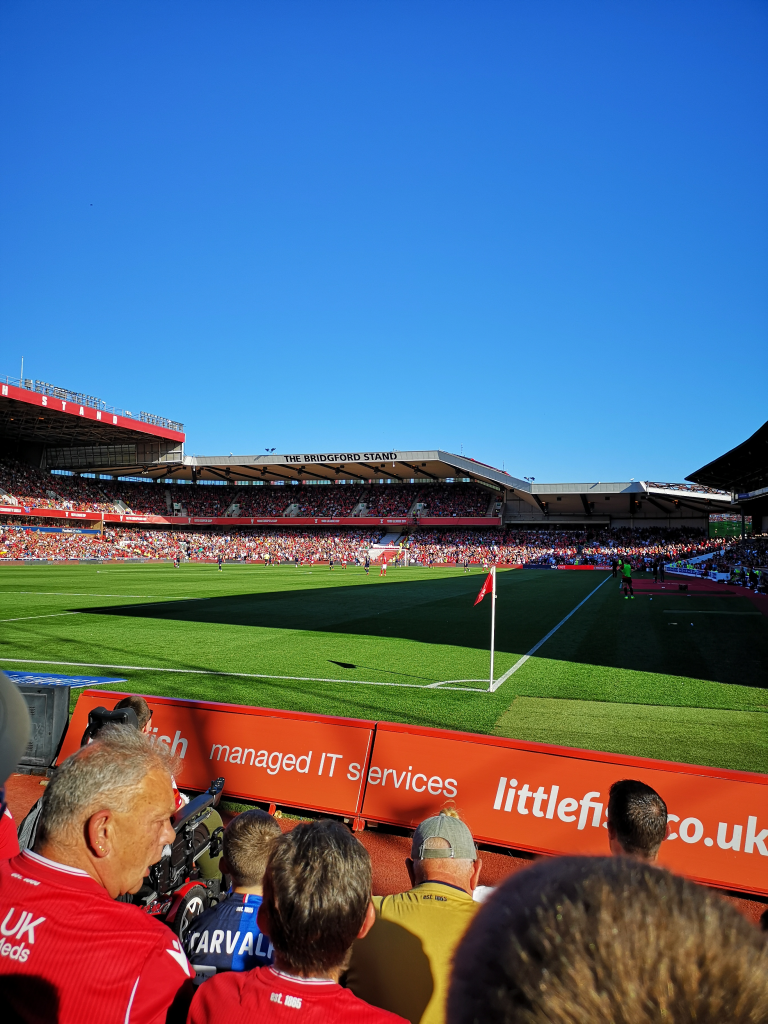 Eve’s view for the Barnsley game

The surprise in the match was Ben Watson scoring which is a great thing! I really loved the moment when Ben scored and I found that amazing because he is one of my favourites. Other bits that I found interesting in the match was the applause for Brian Clough which I really liked although I didn’t notice too many people were wearing green. The atmosphere was good and I had to put my earplugs in to help me with the noise. The ref put 5 minutes time added on and I was a bit nervous thinking that Barnsley could score!

I think Ben Watson and Michael Dawson played really well and I think Lolley did ok. He did hurt his toe during the game against Derby but I still love Joe! I think since Carvalho has come back from injury; he is slowly starting to get back into playing again and Brice Samba was amazing in goal. I thought Barnsley played well and they came close to scoring a couple of times although I don’t really know any of their players names.

Thanks to Eve for her contributions, I had missed the game last week so she helped me out big time. I’m looking forwards to hearing more from Eve about Forest this season.

You can find more about Eve and how autism affects her life below.