An interview with Colin Fray – Part 1

I’ve had some surreal moments in my life but not quite as unusual on Monday evening, as I waited in the BBC Nottingham offices whilst Colin Fray made me a cup of coffee. To many that follow the Reds religiously, Colin Fray is the voice of Nottingham Forest. For a man that has probably got one of the best jobs in the city, I was intrigued to know a little bit more about Colin, the man behind the microphone.

I watched a YouTube video on 150 years of Forest the other night (as I put together an article on the Forest Derby fixture) and the clips had an awful lot in common; Colin’s iconic goal commentary. If you think of all the great times Forest have had in recent years, you can pretty much guarantee that his commentary will accompany it. With almost 29 years under his belt at BBC Radio Nottingham, his voice is becoming as synonymous with Forest as Colin Slater’s was with Notts County. A good measure of any man, in my book, is his contribution to the community. And whilst Colin holds a much esteemed role in the City, over 1,300 Forest games later (and still going strong), that’s a hell of a contribution so far.

In terms of Colin’s journey to the role of Nottingham Forest commentator/reporter, it’s not quite as conventional as you’d probably think. From an early age, a career in commentating wasn’t something that he thought a lot of at school.

Everybody starts somewhere and Colin started with commentating on Subbuteo football games at home; much to his Mum’s annoyance. It gets better still; imagine having a mate who’d commentate on a kickabout after school? Colin was that mate. Although he thought he was alright at commentating, he didn’t quite expect to follow the route that he did. There was no degree in Media or Journalism qualification to get him through the door. In fact, it was a competition that enabled Colin to get a foot in the door at the old Mansfield Road site.

Having left school and got a job working at Thomas Cook selling foreign currency. The BBC ran a competition for amateur commentators. The entry was more of a ‘let’s see’ more than having a determination to make a career out of the opportunity. The 15 minute excerpt of commentary was a cassette recording from a video of the Littlewoods Cup final (younger readers; Google: cassette and video) covering the ultimate winning goals from Neil Webb and Nigel Clough. It’s funny to think that victory didn’t only put Brian back on the road to success, it was also the spring board for Colin’s career. With nothing to lose, Colin sent the cassette in.

Colin was invited to the regional finals at Pebble Mill in Birmingham and went onto reach the National final in London. The recognition had soon bought him to the attention of his local regional station back in Nottingham. A studio guest with Martin Fisher on the midweek sports slot; Colin literally told the story that I’m writing now. Martin must’ve been suitably impressed to offer a few more pieces for Colin to cover. He recalled his first ever gig, a Hucknall Town game away at Hinckley in the FA Vase. When the radio communications failed to work, and in the day and age of no internet and no mobiles, Colin phoned through the match report from a public phone box, half an hour after full time. It’s hard to imagine life without today’s technology but there is something quite endearing about it when you hear stories like that. Being able to overcome adversity must be the ultimate tool in the world of broadcasting.

Colin recalled a worse situation when Forest got beaten at Bolton on the last game of the 2017/18 season. With no Wi-Fi, mobile signal or 4G from the off, the Team literally had to do the whole programme without knowing whether they were on air or not, there was no communication with the studio back in Nottingham! Professional to the end; they’re pretty good these boys and I think we’re lucky to have them.

Back in those early days Colin’s broadcasting hero was BBC Commentator Peter Jones and his particular style left a real mark on him. He was the guy that Colin wanted to be and this was the job he was after. Describing his particular attributes; ‘he had a deep melodic voice and was hugely descriptive. His manner, his presence and friendly voice’ was a real inspiration. Colin recalled his report on the day of the Hillsborough disaster and to this day says that ‘it was one of the most incredible pieces of radio I ever heard’; just stopping what he was doing, looking at the radio as news of the tragedy came through. ‘There was nothing else to do other than listen’.

They say you shouldn’t judge a book by its cover and so when Colin had told me of his days commentating on his mates kickabouts on the local park, I had an image of a teenage Colin, wearing a sheepskin coat, going full blown John Motson on the side lines. Maybe it was wrong for me to assume that his skills laid off the pitch rather than on it but to my surprise, it turns out that Colin was once a 30-goal a season striker! Playing for school sides and at representative levels, Colin moved from left back to centre midfield, left winger and then striker. Getting to the giddy heights of the Central Midlands league, Colin played at Melton Town (second XI) as a left winger. He certainly played at a higher level than me and I always fancied myself as the next Roy Keane! When I suggested that he must have been a decent player; Colin wouldn’t be drawn and offered a humble response, much in keeping with his character; ‘that’s not for me to comment on’. He did drop in the 30-goal a season claim a few seconds later though!

It’s won’t be a surprise to read that Colin is a Forest fan and so his Dad. One surprise though was that despite being from Nottinghamshire, Colin spent many of his younger years living abroad; three years in Norway when Forest were lifting the European Cup and 5 years in Germany until he finished secondary school. Reliant on the BBC World Service for news from the UK, keeping up to date with things going on at Forest was very different to how it is today with no access to internet, social media and blogs. In terms of watching football, Colin didn’t watch a great deal and the only games he got to attend were at Borussia Monchengladbach! On coming back to Nottingham following Forest was back on the radar.

MAKING YOUR OWN LUCK

Whilst Colin may have arrived at Radio Nottingham as a competition winner and had a bit of luck along the way, there was still a lot of hard work ahead to make his way in the broadcasting game. A 10 year stint, (voluntarily) commentating on the Nottingham Panthers didn’t come naturally. He didn’t know too much about Ice Hockey from the outset and had seen only a couple of games prior. A lot of research went into learning the sport and the cliental involved. The opportunity was there to be taken.

His first game commentating on Forest was the 7-0 trouncing of Chelsea at The City Ground. Still described as the best performance he’s probably ever seen at Forest, it wasn’t a bad start for day one. Added to that; National Radio were in touch as the goals were going in, Colin wasn’t just making his Forest debut locally but nationally also. Talk about if Carlsberg did debuts…

An opportunity opened up to become part of the Saturday afternoon match day programme as Andrew James moved on from his co-commentating slot alongside Martin Fisher. Whilst Colin admitted that he wasn’t at the front of the queue, his hard work and commitment to the team had certainly done him no harm. The rest was history as they say..

Away Days on BBC Radio Nottingham always appear to be good fun listening at home and watching the Facebook live videos. Pretty much confirming what you see is genuine; the team are having a good craic; enjoy each other’s company and essentially it’s ‘three lads that get on well; going to an away game (with work thrown in the middle). It’s always a good day out.’

To give a bit of insight, driving is shared with the ex-players being chauffered by Colin and Robin. Friday night’s preparation is vital, getting everything ready to go first thing on Saturday morning. The aim is to get to the ground for 12.30 to allow for any delays and depending where the game is at, there’s usually a rendezvous point for a pick up before the team make their way to the ground. I was a little disappointed that there were no stories of Chippers throwing stones up at Brain Laws’ window to get him out of bed on match day.

To give you further insight into the choice of snacks at the inevitable service station stop off, Colin admitted there was a time where they would navigate the country for Kentucky Fried Chicken restaurants. On doing some research for the interview, I watched a few videos and on watching them back again, there’s some fairly conclusive evidence of when the ‘KFC’ years were! Before then, Colin and Martin Fisher were clearly being paid far too much as they frequented Little Chef restaurants on every way trip. Nowadays, the boys tend to stick to sandwiches as the fast food diet isn’t conducive to the more seasoned gentleman’s frame. One member of the team was described as a ‘coffee snob’ that isn’t prepared to slum it with lesser known outlets. There’s absolutely no way Brian Laws is fussy so I’ll leave you to decide who the coffee prima donna is.. 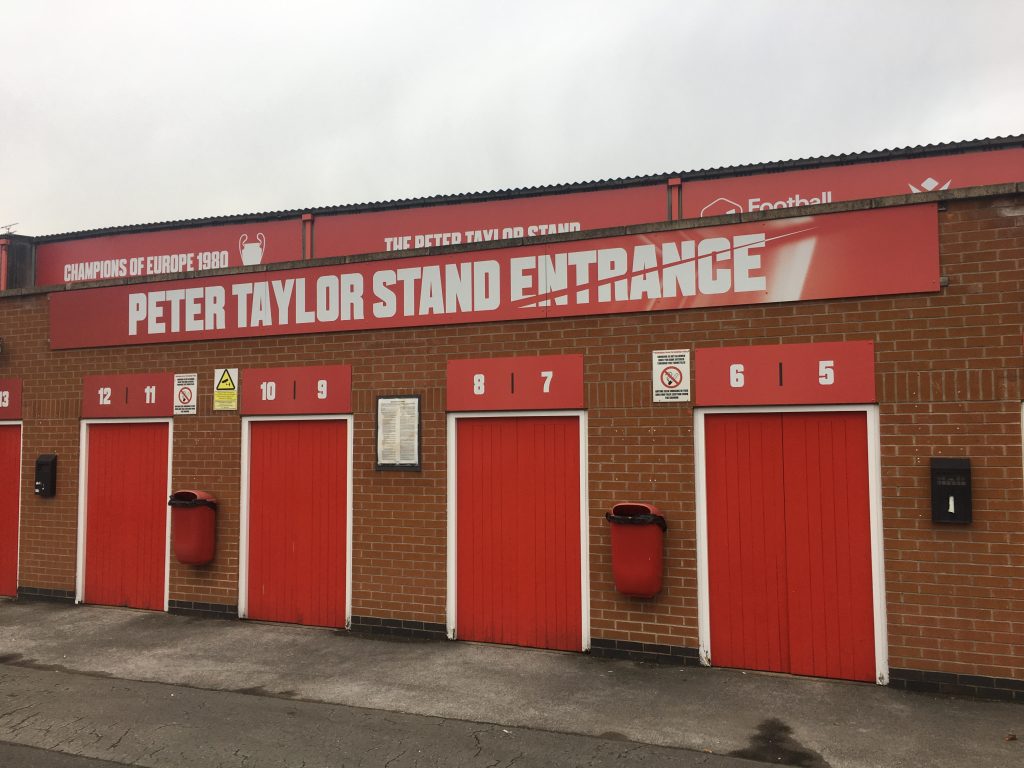 In terms of match day superstition, I was surprised to hear that Colin doesn’t wear a pair of lucky pants. However, for every home game, he always goes through the same entrance at The Peter Taylor Stand. If he doesn’t, the fear is that Forest will lose but by his own admission; this particular superstition hasn’t worked out too well since starting full time commentary back in 1993. Although it’ll be a sad day when the stand gets demolished at the end of the season, Colin feels that the new stadium upgrade will be ‘top notch’ once the development is completed.

END OF PART ONE