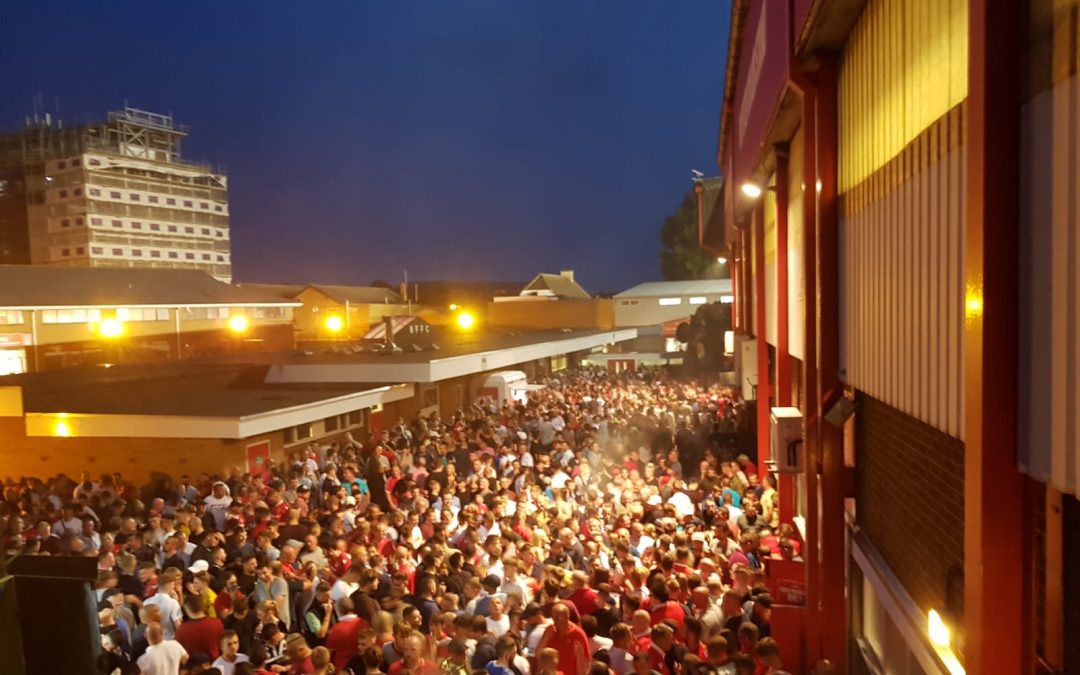 I’m not sure if it’s just me but the over riding feeling coming home last night wasn’t reveling in Forest’s win but was more in disappointment in what could’ve been. Philip Cocu’s decision to stick with an under strength eleven for the entire 90 minutes robbed the Derby game of any potential drama or genuine bragging rights. There seemed to be a miscommunication to his players about the context of the game.

Akin to my pre-match hotdog; with the vendor out of onions, I had an unsatisfactory feeling at the final whistle. The end result was a necessity but the win was the least memorable of Derby days. It was probably the biggest mismatch I’ve ever watched between the two teams. I’m not begrudging anybody from enjoying the night but there’s no point in getting carried away with it either. Derby were the worst side we’ve played against this season; including Fleetwood Town in the previous round.

This wasn’t a true reflection of Derby’s true potential of course. I suppose there isn’t too long to wait for their league visit but it will be a very different experience for our players. I can only think Philip Cocu was trying to lull us into a false sense of security.

Don’t get me wrong, I like beating Derby but its that much sweeter when both teams have been at it. Derby’s more experienced players didn’t seem up for the occasion. For all their fans bravado about being in our seats prior to the game, it was silence as usual. They were reduced to chanting about Wayne Rooney to try and save face. Some were trying hard not to show what we all knew; Derby had lost that loving feeling.

Excuses were a plenty about them fielding a young and weakened side. Forest’s average age was a year younger. We’d made eight changes from Saturday and eight players in the starting line up had never played in a Derby game before. Two more came off the bench to make their Derby debuts also. If that’s the depth of Derby’s squad then I can perhaps see why players were rested.

From an objective point of view, all I really learned from the game was that our squad is stronger. Despite the talk about the youthfulness in white shirts, an 18 year old in a Red shirt was by far the best young talent on show. Brennan Johnson looks a genuine prospect and could be a real hidden gem as our season unfolds.

Brennan doesn’t seem to play with much fear. We lacked a player that could make things happen when Carvalho was out of the team last season. I’m optimistic that Brennan can make a bigger contribution as time goes on.

Whilst he was showing his skills with the ball, Derby’s underlings seemed more intent on trying to make a name for themselves by leaving the boot in after challenges with cheap shots. Not that it bothered the Forest players. It was men against boys; not even a contest at times.

Semedo and Adomah were our standout players and will both be hoping to get a start on Saturday. Those two had never played in a Derby game before either but they managed to put a performance on for the fans. It was by far Adomah’s best game in a red shirt and he took his goal well, once again from another Forest corner!  He wasn’t finished there. Whilst it was far too easy for him to beat 3 Derby players on the left wing, his cross for Joe Lolley’s header was a thing of beauty. Pure textbook in how to stand a cross up to the back post. I didn’t even know Joe Lolley could head the ball but the cross was too enticing. It was a determined leap and emphatic header to get on the end of it. That’s what it meant to Joe.

Maybe Derby’s younger lads would have benefitted from Captain Calamity at the back to get things riled up or Jack Marriott on from the start to at least give them a chance of threatening. It just didn’t feel like the usual party. Derby were not playing their part. Where was their passion? Their pride in trying to get one over Forest at all costs? I was hoping that they might have stuck Tom Lawrence on for the last 20 to give it a go but nope; no real effort to salvage something.

The evening got a little stranger for me when momentarily, Richard Keogh had managed to go up in my estimation as he joined in with the minute’s applause for Junior Agogo. A bit of class from Widow Twankey. Credit’s due where its due. Fortunately, the feeling didn’t last too long as by the time I’d gotten home, he’d been involved in a fracar with the Forest groundsman during the warm down. I’m not sure we’ll ever get the full story to explain a bloodied Keogh and a bloodied Groundsman’s pitchfork….

I was quite relieved that Keogh’s rise in my estimations had been short lived. Given the strange occurrence, I’d resigned myself  to a rigourous scrubbing with bleach and a wire brush before bedtime just to get rid of those impure thoughts.  I can’t help but feel annoyed at Philip Cocu. He robbed me of seeing my favourite pantomime villain. Jamie Patterson had clearly not read the script and looked embarrassed to be in a white shirt on the City Ground pitch. In recent years, former players have reveled in the abuse. Carrying Derby’s biggest threat, he didn’t get going at all.

Despite my disappointment in Derby, there were plenty of other positives for Forest. Samba Brice looks full of confidence in goal and Joe Worrall continued with his steady performances. I thought Yuri Ribeiro had a cracking game at left back and was up and down all night.The return of Carvalho was the biggest plus of the evening and whilst he was understandably a little rusty, its great to see the little magician back on the pitch. There were some really encouraging patterns of play with Thiago Silva. Whilst there was definitely a lot of luck with our third goal, it was a great move leading up to that. John Bostock played well in the midfield and again he improves our ball retention. Whilst Rafa Mir missed a few chances, I thought that was his best performance yet. We know what a goal can do for out of form strikers so it would be nice to see Rafa get off the mark. Perhaps we need Kenny to chirp up in The Post…

At the end of the game, I saw Sabri Lamouchi go onto the pitch to congratulate all of his players. In complete contrast, Cocu stood on the touchline motionless whilst speaking to his backroom staff. No real acknowledgement to his fledglings on the pitch nor the sheep penned in the Lower Bridgford. Odd. Can somebody send him some videos for the next one please? He can watch this one as a starter.

At the very least, Forest will have taken some decent gate receipts and will take a decent following to Arsenal away in the next round. A trip to The Emirates will be just reward for making those 200 plus phone calls to get my Derby tickets.

Team performance – 7 – you can only beat what’s in front of you and Forest were on top throughout. Got out of the gears when it was needed.

Samba- 8 – another confident display. Didn’t have a lot to do but Derby games can always play on the nerves. Was comfortable in all he did.

Cash – 7 – back at right back and saw off Jamie Patterson without issue. Only look threatened at the expense of his own mistakes. Looked pleased as punch to get the armband off Joe Worall. Another one who knows what this game meant.

Worrall – 8 – an excellent performance from Joe up against Mason Bennett and then Jack Marriott. No bother

Figuerido – 7 – solid enough at the back. Distribution isn’t up to the level of Worrall and Dawson.

Ribeiro – 8 – another good showing. His first Derby game. Showed that he wanted to do well. Encouraging.

Semedo – 7 – athletic performance. Too good for Derby in 3rd gear.

Bostock – 7 – calm and composed on the ball. Another on only his 2nd game that treated the game as it needed to be.

Lolley – 7 – good to see him in the team to ensure we had a genuine match winner in the armoury. Great goal.

Adomah – 8 – Man of the Match. Showed great quality and his experience was key.

Mir – 7 – a better game from Rafa. Needs a goal. Was unlucky at the end when he rolled their centre half to turn and shoot. Best thing I’ve seen him do so far. Its not great but its a start.

Silva – 7 – Came on and enjoyed the derby experience.

Chema – 6 – Didn’t have long enough to make a real impression. Looks like curtains for Milosevic.