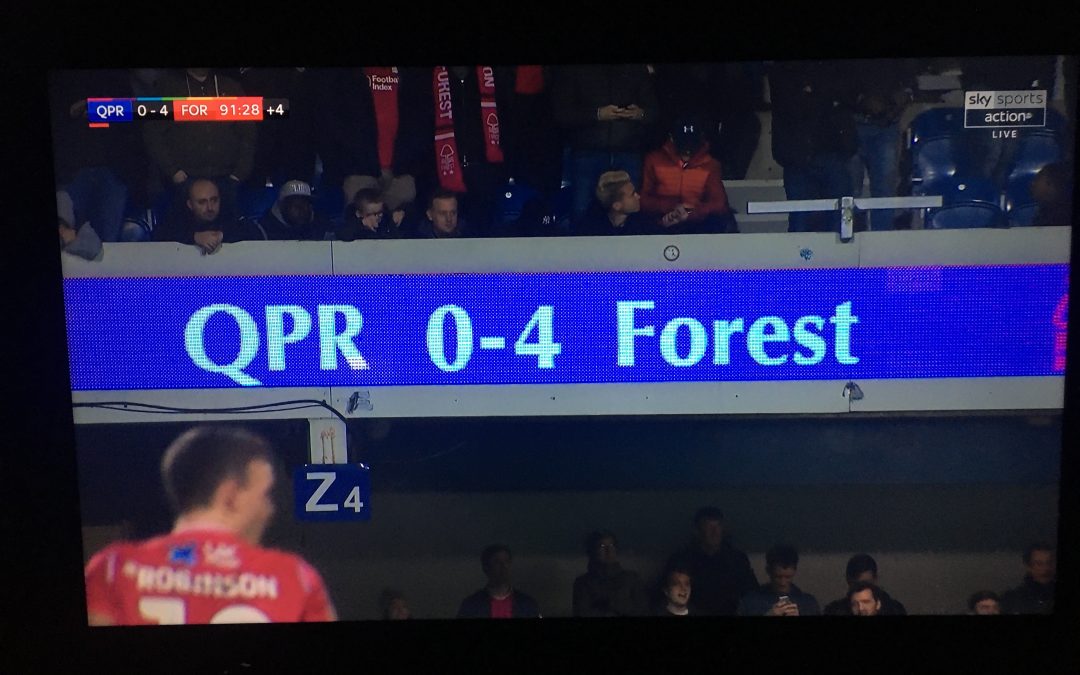 Right from the off tonight, Forest looked well up for the trip to QPR as soon as Joe Worrall was rallying the troops in the pre match huddle. As far as Wednesday evenings go, that was pretty enjoyable stuff although we momentarily threatened to make a mess of it midway through the second half.

I thought Forest were very good value for the first half lead. Players continue to grow by the game and none more so than Tobi Figueredo. He’s certainly back to playing his best football after initially signing for Aitor Karanka. He looked solid in everything that came his way and did well to nod the ball home when you see many centre halves get pulled up for unnecessarily putting their hands on players.

There was something very familiar about Mark Warburton’s side trying to play the ball out from the back with difficulty and QPR were causing their own problems. Forests high press was a definite sign that Sabri knew the weak spots.

Tiago Silva, Cash and Lolley all started superbly well with the ball and I thought we looked an excellent outfit in the first half.

Joe Lolley almost played as a second striker and was unlucky not to fight his way in front of goal after some good work from Lewis Grabban in the opening exchanges. This was Joe back to his best and continuing with his start, he claimed an assist for Forests opener. A cracking 2nd corner from Joe picked out Figs at the back post to easily nod home. Looking at that team hug afterwards, it showed real togetherness. Beautiful to see.

Brice Samba was called into action on a number of occasions and I’m running out of superlatives for him. He made some good saves and his handling was immense. He’s the best passer of the ball in the team and the way he dealt with a mix up with Joe Worrall and Ben Watson about summed him up. What would have been catastrophic under previous keepers, Brice was cool as in charging down the striker, parrying his cross and gobbling up the looping ball. You won’t be surprised to read that #ThingsBriceSambaCouldSave was trending in Nottingham around 8.30pm.

Whilst Forest had been good value for the lead, they were also architects of QPR’s building threat. If we can cut out the sloppiness, we’ll be a hell of a side.

Into the second half and Forest continued to look dangerous with Joe Lolley continuing to be a nuisance. QPR’s sending off looked harsh to me as their centre half pulled Lolley to the ground but never mind. This is The Championship after all and they’ll be a few more decisions go against Forest as the season unfolds!

A bit of gamesmanship was required afterwards to settle things down but for a period, we struggled to put our stamp on the game. Matty Cash was a bit silly to be diving in so shortly after the red card to give the ref a chance of even-ing things up but thankfully he wasn’t having the QPR theatrics.

QPR seemed to be building up some pressure despite their man deficit and Josh Gowen really should have scored with a headed chance following good work down the right wing. With Brice Samba stranded, the QPR fans thought he had scored; unlucky! You love to see it!

It was the first time I’ve heard ‘ain’t nobody’ for a while and it was music to my ears sat on the sofa. Joe always seems to have a good game against QPR and tonight’s performance following on from Saturday is showing that game by game; he’s rediscovering his form. Lolley is back!

Figueredo and Carvalho almost nicked a second following a melee in the box but thankfully I didn’t have to wait too much longer to finally relax and enjoy the remainder of the game.

Forest got the all important 2nd with 10 minutes to go when an excellent tackle from Watson set Sammi Ameobi off against the QPR left back and there was only going to be one winner as soon as he got his head up and took his man on.

Sammi pinged over a beautiful pass for Lewis Grabban to tap home and the game was done.

Joao Carvalho scored a cracking individual goal which has to make the ‘megs’ segment on Soccer Am this Saturday morning. Cutting in from the right, he stuck the ball through the in rushing defenders legs before burying the ball into the net with the outside of his boot. Joao looked pleased as punch, celebrating in front of the jubilant Reds behind the goal. It’s been a long time coming for Joao and it’s so pleasing.

In the dying moments, Keeper Lumley thought he’d send the Forest faithful home  in delirium with a great assist for Alfa Semedo to convert for Forest’s 4th! Happy, happy days indeed. Ebby looked like he was enjoying himself.

It feels like that’s a big marker that’s been put down tonight and it’s really starting to come together.  Sabri has clearly done his homework on QPR and didn’t allow them to settle from the first whistle. Although yes, it was against 10 men but that will do no end for team belief.

I’m sensing that we’re about to go up a gear…there’s definitely a couple more we haven’t seen consistently yet so far this season.

TEAM PERFORMANCE: 8 – Still cause our own problems at times but we looked really up for this tonight!

SAMBA: 8 outstanding first half. The Sky Sports commentator didn’t rate him and as the media seem to have quite an influence in this country, it’s good news for us!

CASH: 8 Looking a very good right back. Brilliant to witness his game by game improvement at full back. Silly booking though.

ROBINSON: 7 Great stuff from Jack. Psycho-esq tackle in the first half, unlucky not to get a goal in the 2nd half with a fizzer.

WATSON: 8 – superb from the skipper.

SILVA: 8 – Another big display from Tiago. Looking quite the player at the moment.

LOLLEY: 8 MAN OF THE MATCH – The prodigal son returns. So pleased for Joe.

AMEOBI: 7 – Constant threat. Completely unpredictable, you can’t switch off against him.

ADOMAH: 6 – understandably rusty but played his part and got some much needed game time under his belt.

GRABBAN: 8 – hardworking and threat all night. Back on the goal trail after the international break.

CARVALHO:  8 – settled things down and scored a cracking goal! We love Joao!!!!!

BOSTOCK: 6 – sured things up after his first touch brought a booking. Good for him to play a part in tonight’s big win.