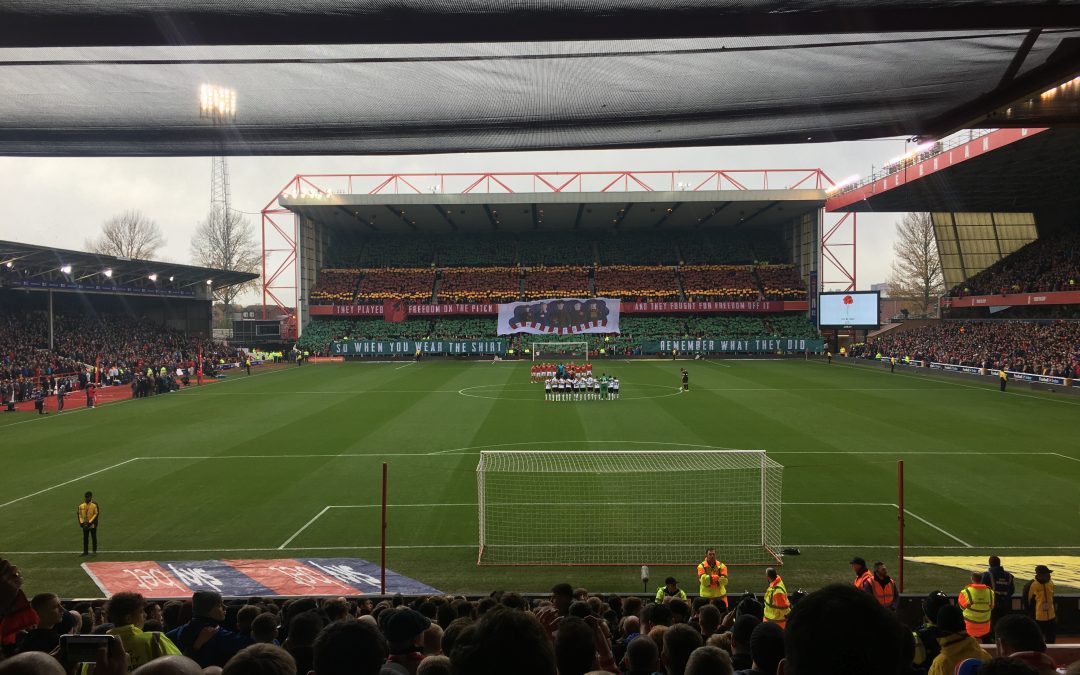 There are days when your football club stands head and shoulders above your rivals and notably yesterday was the display by the Forza Garibaldi. It was simply the most poignant thing I’ve ever seen at The City Ground. The Last Post bugle always puts hairs on the back of your neck when you imagine what those young men sacrificed in the Great War but to have seen the colours of the Sherwood Foresters across the length and breadth of the Trent End was moving. The Foresters contained both Nottingham and Derby men and so on this particular day; it was a real show of class. I discovered last year that I had a great, great uncle that never came back from that war so it’s fitting for me that the club I love should honour those that had fallen with such fantastic imagery. 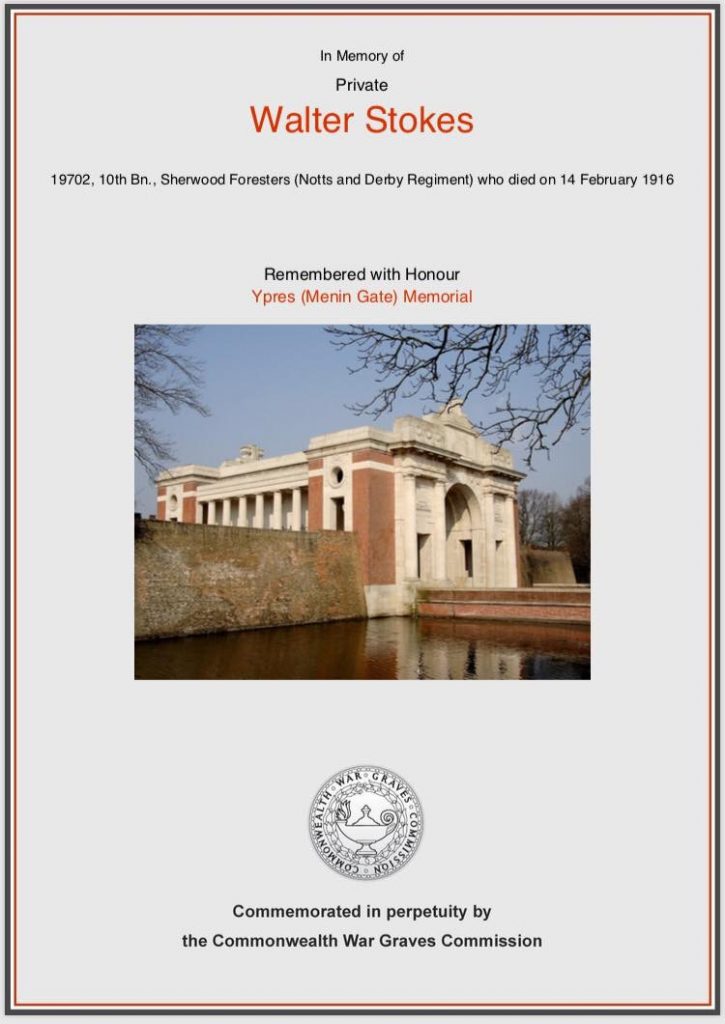 The second display wasn’t so bad either. This was a community display of real life art after a call to arms to bring your scarves and flags. It’s not a massive effort for everybody to find a scarf but the key thing here is that it’s not manufactured. To see those scarves all at once makes a mockery of the plastic flags doesn’t it really. I haven’t got a Forest scarf so my dad dipped into the loft to find a couple; from the Littlewoods cup final against Luton in 1989. That’s always a good omen. Year on year, the displays are bespoke and original to the club and the city. Others will copy in time. I wonder who’ll do it first?

Whilst the Forza had set such great standards with the opening; it’s a shame the game didn’t quite live up to it as a classic encounter. I thought both teams competed really well and although Derby were nothing near the sides that have come to Forest in recent years, I thought they carried the bigger threat in the first half.

Thankfully Sabri got a word or three in the ear at half time because until about the 80th minute, there was only going to be one winner yesterday. The intensity we showed in the 2nd half was as good as it’s been all season. Both team showed a lack of quality on the ball throughout but a key difference was Forests willingness to win the ball back. Enter Tiago Silva……

How good was he yesterday? That was Tiago’s best game in a red shirt to date and what a time to do it.

There has been no doubt in my mind that from his first few appearances, Tiago has all of the credentials to he a big success in English football. His ball retention has really started to improve in recent weeks and we are really starting to see his true potential. He looks like he’s got to grips with what it means to pull on a Forest shirt too. Whilst some will say he still gives the ball away too much, I do at least think he’s giving it away in the right areas. A lot of those passes are now forward ones rather than sideways. Yes there’s room for improvement but 15 league games in, there’s plenty of time. Maybe we’re too hard on players adjusting to the English leagues; we can’t expect everybody to adapt straight away. Make no mistake though, game by game the lad is growing.

Whilst there was huff and puff from both teams, it was hard to see where the goal was going to come from. On a walk back to my spot after half time, I thought it had nil nil written all over it. Enter Jayden Bogle.

I’ll admit that I’d momentarily switched off from the game as Derby looked to build an attack but imagine the glee when the roar of the crowd diverted my eyes to Lewis bearing down on goal. Whilst he was clean through,  Lewis can be a bit hit and miss in those situations and still having a lot to do, it’s credit to him for the measured finish.

For the next ten minutes or so after scoring, Forest really went for the kill but we just couldn’t muster enough quality with the final ball. Joe Lolley hit an untidy shot that looked like it was going in until it hit Lewis Grabban as he tried to get out of the way.

The ref, Darren England didn’t have the best of afternoons and it was with major frustration that he failed to play the advantage as Tiago Silva broke from midfield as Forest looked to land the final blow.

As it is with most games in the Championship, we didn’t get the rub of the green when dare I say it, the video technology might have backed us up later in the game. Tom Lawrence should have gone for the tackle on Bruno Ribeiro second half. It was high and it was late and if you ask me, the reason why he only got a yellow card was because the referee should have blown for the foul on him before (Worrall), if not for the initial challenge from Watson. I don’t have a problem as such with Lawrence in that instance because you could see it was a frustrated tackle. Those that have played football can probably sympathise at the lack of protection but by the letter of law he should have gone; the ref seemed to let him off for his own inadequacies.

Marriott and Martin both should have done better when well placed and although they’d been feeding off scraps; it’s further testament to Lewis Grabban that with similar service, he was alert to the opportunity that he was presented with to be the match winner.

Inevitable pressure followed without that second killer goal and whilst there were a couple of nervy moments, Brice Samba looked an absolute class act in settling the nerves. Jack Marriott and Chris Martin should have done better with chances that fell to them but really they d been living off scraps. It adds either further testament to Lewis Grabban that with similar service, he was alert to the opportunity he was presented with to be the match winner.

To a man though, I thought Forest were pretty good. It may not have been the best team performance but Sabri certainly knows how to adapt with a horse for courses mentality. Their clearest threat in Bogle was soon stopped from marauding up the pitch in the first half hour and if he isn’t carrying the ball than clearly, passing under pressure isn’t Bogle’s greatest strength.

Whilst I’m under no illusions that Forest need to improve, we’re only 15 games in and we have a manager that not only can pick wins up when we’re not at our best; he appreciates what derby day means. Happy birthday Sabri, you’re earning a place in Forest hearts by the game.

Cash: 8 – we’re gonna struggle to keep hold of him at this rate. Derby never got a grip on his attacking play.

Ribeiro- 8 – was sceptical about his signing but being proved very wrong.

Worrall – 7 – stood up to the demands of a derby day and dealt with Martin & co with no real fuss.

Watson- 8- another top quality performance. Without Dawson in the team, don’t underestimate his influence. What a leader he is.

Silva – 9 – standout performer and my man of the match. Industrious and creative. Superb display.

Yates – 6 – hard to do derby day tempo after only a game back. Didn’t let anybody down though. Competed for everything.

Ameobi – 8 – Our biggest threat. Could have had 3 on another day. I’ll say this to his detractors; if he could do it every time he got the ball, he wouldn’t be anywhere near Forest.

Lolley – 8 – great game from Joe. He’s not getting the breaks which you need sometimes. Tremendous endeavour.

Need to keep him scoring because his levels of performance go up when he’s feeling happier in himself.

Carvalho – 7 – added some much needed composure as we started to lump it.

Adomah – 6 – more know how after Lolley was blown.