Bloody hell, we’re finally up and running in what seems an age since Forest last won a game of football!  It’s hard to put into words the general lift and sense of relief and elation I felt on the full-time whistle at Ewood Park. How can Forest winning change your outlook on life? I’m not complaining, it felt good and a feeling I thought I’d lost. I wanted to shout it to the top that ‘Forest are back’ as I nipped down the co-op for a few more celebratory beers in rural Lincolnshire…

Whilst to get the win was amazing, in terms of the performance, the biggest takeaway was the focus of the players against a vibrant Blackburn bunch that prevented them from getting into any kind of rhythm that has seen them top the goalscoring charts this season. The new manager bounce didn’t give us an entire wind of change but we looked organised and well-drilled, very much how we did under cough, cough Sabri Lamouchi.

The line up was interesting and that Hughton opted for some familiar faces from last season and I thought he was absolutely right to bring in Tobi Figueiredo and Ryan Yates back into the fold.

Ryan Yates went a little way to win over some of his doubters with a very good display in Forest’s midfield and I thought next to Harry Arter, the pair took the game out of Blackburn’s reach with some tenacious tackling and good use of the ball. Jack Colback looked to be getting back up to speed with his pressing earlier in the game before his afternoon was curtailed through injury but I thought we looked a lot better once Harry Arter came into the action. It’s not easy to come into centre midfield halfway through a game but I thought he really helped Forest further establish a foothold in the game.

My view on the Forest midfield is that one of the DCM’s needs to have some creativity on the ball and I think Arter gives us that. I would like to see Harry keep the armband and that is no way a sign of disrespect to Lewis Grabban. His experience and know-how are vital in how he speaks to his teammates and officials. Watching him in action at Huddersfield the other week, and with no crowd or Sky TV to mute his comments, he was constantly in the ear of the referee, linesman and fourth official, letting them know what he thought of certain decisions. Whilst he is an older head, we’ve missed a leader since Ben Watson departed and Arter is simply naughty by nature in his approach. If we’re going to do anything this season, the needle to upset opposing teams and throw them off their stride is a vital ingredient. 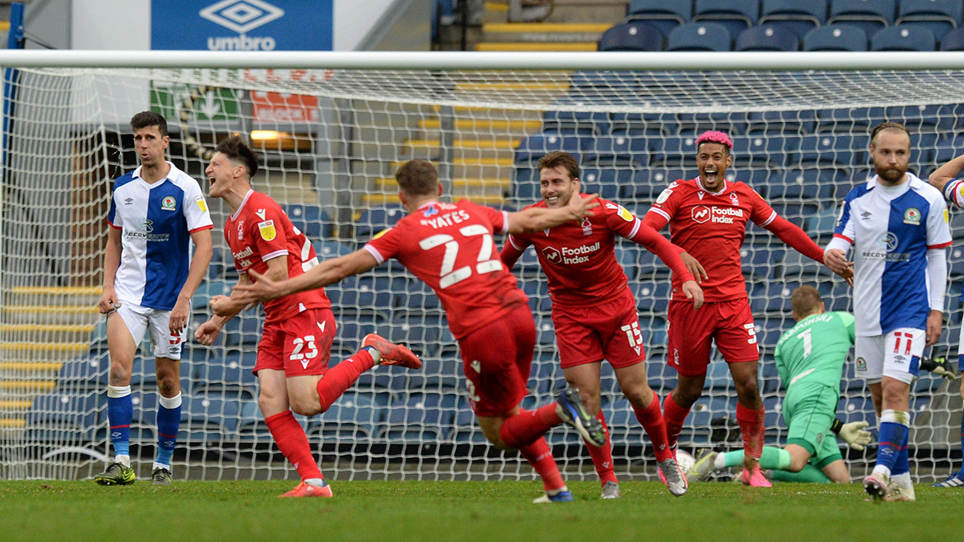 Alongside Arter, Yates continued his good start to the season performance-wise and is improving by the game.  With added maturity perhaps this is going to be a big season for young Ryan. The last three managers have fancied him and with all respect, the comments from his detractors are a) they are not football managers and b) do not see him train day in day out. Could it be possible that Yates feels more confident on a day to day basis but just needs to bring that level to a match-day? He’ll only get that with games.

In an attempt to appease a certain section of the fanbase, I’ll suggest that he does a karaoke version of Minder’s ‘I could be so good for you’ and post it on social media. It’s great to see him playing well and enjoying the win with his teammates. You could see the delight and relief as he celebrated Joe Lolley’s goal, pounding the floor to get his frustration out from the last few months. His hug for Joe at the end was so endearing and a real brother  in arms moment.

If Stuart Pearce was doing that 30 years go, those images would be iconic. It’s wonderful to see. I interviewed a non-league player at Matlock Town recently who mentioned that he knew Ryan in conversation. He told me that there wouldn’t be another player at the club that is as committed to Forest then Ryan is, he loves the club. The steady string of renowned managers can’t all be crazy?

I’ll be honest, I’ve been a bit worried about Joe Lolley of late and was so pleased to see the black cloud lifted from above his head. Joe looked devastated after the Stoke capitulation and an image of him during a preseason team-building exercise was that of a thoroughly fed up, young man. A niggling injury and some down in the doldrums performances hadn’t helped him one iota in shaking off the hangover that had clearly hurt. 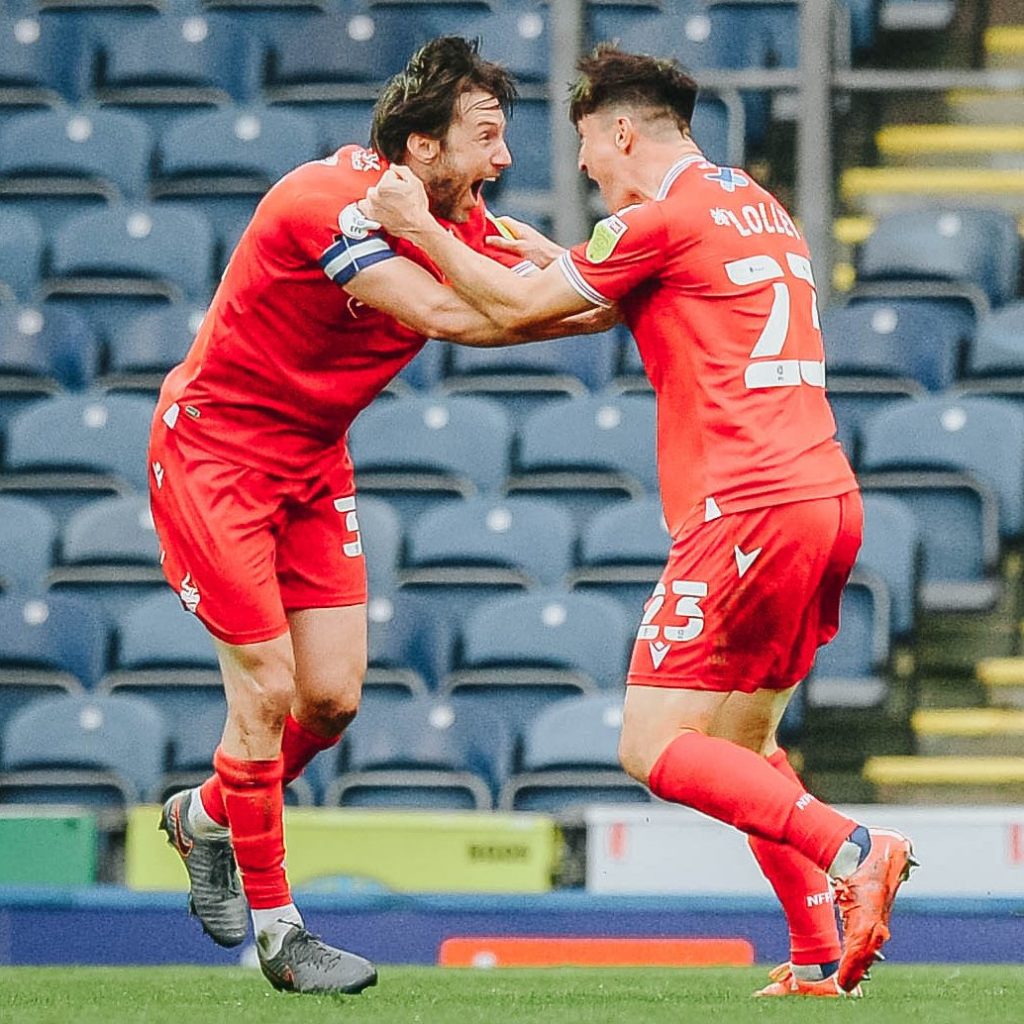 The arrival of Anthony Knockaert will let Joe know that Forest can’t wait for him to recover and so to see him get the winner (albeit a massive deflection) will give him a huge boost.

Joe has been great for Forest since he joined in 2018 and whilst he’s had some dips in form, it would be fantastic to see him causing devastation in the Championship like we know he can. Hopefully, Chris Hughton can give him the confidence to see him fulfil that potential. Added competition won’t hurt him one bit.

Although it was certainly a team performance, new boys Scott McKenna and Nicholas Ioannou really impressed at the back. Cyrus Christie has slotted in like he’s been at Forest for longer than a couple of games and although it was a personal frustration that we couldn’t get Luke Freeman into the game a little more, his delivery from set-pieces was better than what we’ve been treated to in recent times. It’s refreshing that we have a No.10 in the team that can help support the front three.

Whilst it wasn’t Lewis Grabban’s day and looked better with Lyle Taylor’s aggression up top, we all know that Lewis is only a goal away from getting back to the confident player he can be. To have a great back up option will only help Lewis in the longer term. It was fantastic to see Lyle buzzing after Lolley’s winner. To say that we’ve had a lot of new faces come in, the sense of togetherness at the final whistle gives so much cause for optimism.

We can’t get carried away of course but there’s nothing wrong in enjoying the moment and let’s hope it can continue this week with Rotherham up on Tuesday and the big one on Friday evening against Derby. Colin Fray could barely hide his excitement at full time and Chis Hughton was clearly keeping a lid on his emotions. However, that wry smile and ‘This is what we do’ quote told that he was glad to be back in football and most importantly, winning games. There is a sense that the club can come together and see clearly now the rain has gone. Looking at these images, it’s good to see the Forest boys are back.