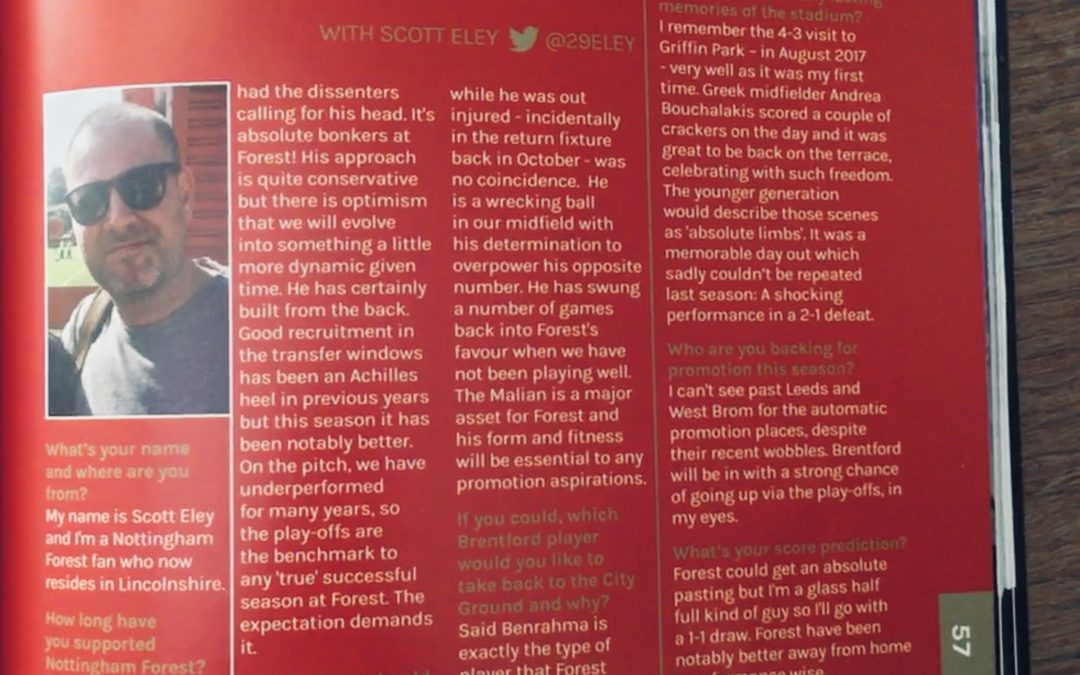 It’s a well known thought in sport that you should never under estimate your opponents. Forest’s win at Brentford on Tuesday night had a resounding sense off exactly pulling that off. My pre-match piece was full of respect and almost envy of what Brentford are achieving as a football club but in conversations with opposing fans, there was a sense of superiority that they were a far better side than this current Forest outfit. There’s not a lot of argument from me that the Bees have a great brand of football and with ball retention being a big issue for Sabri’s boys for much of the season, I wish that we could play a more exciting brand. However, as we all know, football is never this simple. This Forest team continue to evolve and whilst we’ve been pretty good at the uglier stuff so far, we all know that in terms of being productive with the ball, we have the players to do this. I thought we were excellent on Tuesday night, showing a combination of grit, determination and carrying a genuine attacking threat when we were in possession. Sabri is 7 months into his job and the first phase has been making us hard to beat. We’ve been waiting for some of our forward players to come into form and it feels like after the dip in December; as a collective, performances have improved. Joe Lolley is now carrying the consistent threat we all knew he had in his locker and it’s no surprise to me that we have picked up wins based on his return to form.

A massive missing ingredient in the team has been Samba Sow and since he has got back into the team from injury, we look a much better side. Not only that, his return has resurrected the top quality form of Ben Watson as his midfield partner. The pair were outstanding in Forest’s midfield to curtail any Brentford threat coming through the middle of the pitch. Strength, energy and determination to win the ball back was a terrific feature of Tuesday’s win. The composure to keep the ball  in possession was very good and on a number of occasions, Ben Watson got the Forest attack going hrough a range of precise short and long passing. Ben is still trying to shake off some negativity from our own fans but surely even they can see the contribution that he makes to the team. Samba Sow enables this to happen. I warned Brentford fans that he was the wrecking ball in the middle of the pitch and his pressing and aggression was there from the very beginning of the 90 minutes. Sow’s presence enables us to push further up the pitch and apply pressure on the opponents defence. The way Forest started, it seemed key to try and get that early goal and whilst it came via a deflection, Lolley’s first touch from Thiago Silva’s corner brought him time to get a shot away that span into the top corner. Love you Lolley!!

From that moment, Forest looked in control of their own destiny and were showing the composure and professionalism that makes us look a very good Championship side. I’ve bemoaned our self implosion at times and really do feel that we cause our own problems. Calmness was personified all over the pitch from the keeper up to Lewis Grabban; nobody had a bad game in a Forest shirt. Our tactics to allow Said Benrahma to have plenty of the ball was a little risky but for whatever reason, he didn’t have his best game and possibly a personal tragedy may have played a big part in that. However, Forest had a job to do and we did it incredibly well.

Brentford may have had the lions share of possession but I thought we carried the bigger threat all evening. Lewis Grabban had a great chance to nudge us further in front in the second half but unfortunately the ball wouldn’t come down quick enough for him to do anything other than volley straight at the keeper having initially chested the ball down well into his own path. Minutes later, Joe Lolley swung over a fantastic cross from the left that Lee Pinnock did incredibly well to get to the ball ahead of Lewis, as he looked destined to nod the ball home. We of course should have had a penalty as Pinnock got the wrong side of Lewis as he got into the box, getting himself in a tangle that knocked the Forest striker over. Perhaps the ref thought that Lewis was trying to buy a penalty but there was certain contact with the ball well out of Pinnock’s reach. It looked a penalty to me. VAR anyone? No, ok!

Brentford continued to huff and puff but they seemed to be losing their heads and Forest reduced them to a pretty average looking side. The Bees ball retention was very much like Forest’s this season as a number of simple passes went astray. The momentum was all with Forest and Brentford looked a beaten side as I prepared myself for a grandstand finish. In the end, I thought we were more than comfortable and worthy winners. I’d seen us pull off a similar performance at Fulham earlier in the season and so it wasn’t a surprise, it’s definitely in the locker, it’s now about maintaining these levels as march towards the Easter period. Us Forest fans have waited an awful long time to be truly proud of a team in red (blue!) and the togetherness and team spirit was there for all to see at the final whistle. Even Sabri got in a set-two with his opposing number Thomas Frank at the end,. Brentford looked like rabbits in the headlight, bamboozled that a perceived less superior footballing outfit had found a way to beat them.

That said, we all know the pit falls of resting on your laurels in The Championship and that win won’t define either of Forest’s or Brentford’s seasons. What it does say to me, is that in a big game, we can mix it up and look a very good side on our day. Birmingham will prove just as tough a fixture on Saturday and we’ll need to be at it again. The Championship is relentless and we are showing the stamina to keep going at this moment in time. Game by game, we have to keep going. There is no sprint in this league but I think we have found 4th gear. Exciting times. COME ON YOU REDS!!!!

SAMBA: 7 – Didn’t really have much to do. Looked calm in what he did do and was accomplished when dealing with a couple of shots that came his way.

CASH: 8 – Handled Benrahma pretty well and was the ever threat going forwards.

RIBIERO: 8- Thought he had a very mature game at left back, particularly in his defending.

FIGUIERIDO: 8 – Looming a terrific player for us at the moment. No nonsense defenders are like needles in haystacks in the modern game. He’s one of them and he’s ours.

WATSON: 8 – MAN OF THE MATCH. Superb game management in the Forest midfield.

SOW: 8 – ‘You came in like a wrecking ball to quote a Miley Cyrus lyric. Got to be a song in there somewhere!

SILVA: 7 – Did an awful lot right but struggled with a final pass at times. Some of his skill under pressure was superb.

LOLLEY: 7 – Tireless performance from Joe and great to see him getting some luck in the last few games. Momentum is everything!

AMEOBI: 7 – Much more consistent performance from Sammi and he’s such an attacking threat. Encouraging.

GRABBAN: 8 – Mastered playing up front on his own at the moment, he’s in great form and best striker in the league at the moment.

DIAKAHBY: 6- Didn’t have much time to make an impact but worked hard to press Brentford’s backline.

YATES: 5 – Had a couple of minutes to keep the pressure on Brentford’s passing game.