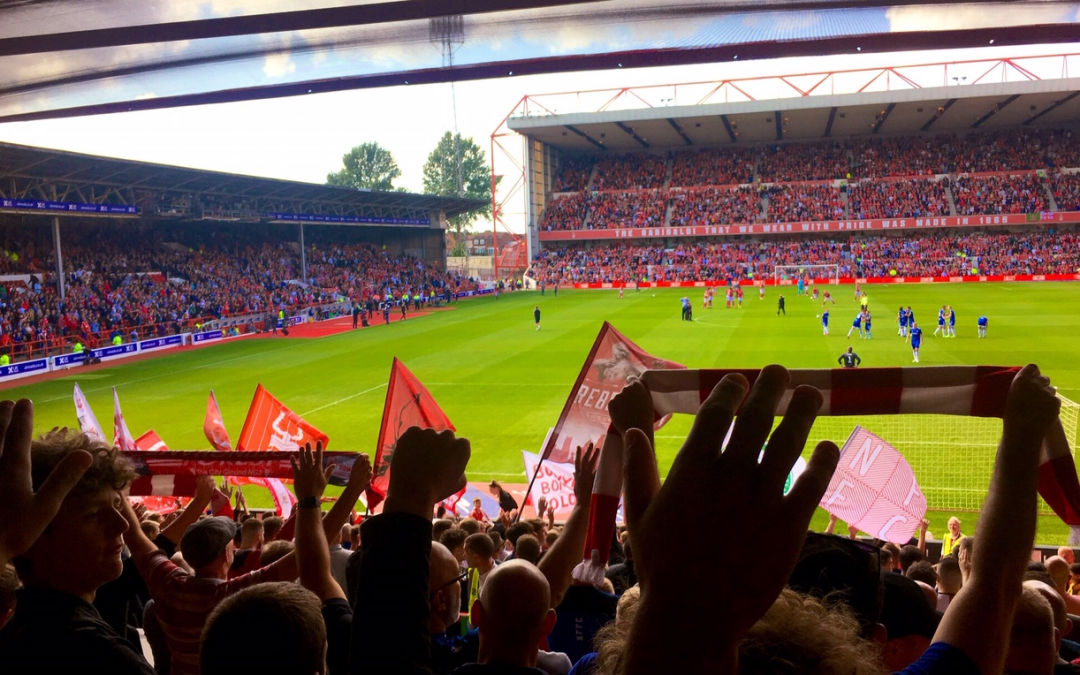 Surprisingly, there were a few eyebrows raised at Sabri Lamouchi’s team selection for the arrival of Birmingham at The City Ground on Saturday. As far as I could see, bar Rafa Mir, it was the team that finished so strongly against Leeds the previous weekend. The bench looked strong too.  There’s no pleasing some folk. Players keeping the shirts that they’ve earned is a good thing in my book. I thought the manager got his tactics bang on yesterday. He certainly knows better than some on the #nffc timeline. At least many were gracious enough to enjoy a few slices of humble pie with their celebratory pints afterwards. Let’s have a bit of faith eh?

Equally as pessimistic about Forest chances was one Blues fan, who had given me his game prediction of an easy 2-0 win against his relegation candidates for the season; Forest. I’m not sure if any of his other bets came in yesterday but I suppose it’s a long season ahead..

Based on what I’ve seen from our first three games, I wasn’t entertaining these detractors. My glass was definitely half full after a couple of pre-match shandies. It was good to see the manager sticking with the likes of Ben Watson and Matty Cash. They’ve barely put a foot wrong in the first couple of games and that continued yesterday. The weight that he has put on over the summer seems to be paying dividends already. My biggest criticism of him last season was that he was pushed off the ball too easily and spent most of the time on his backside. The steak and Guiness diet is working. He was very good again both defending and attacking.

Pointed out by the man next to me (knows his onions), Matty was being targeted in the early part of the game with Lucas Jutkiewicz pulling over towards him when Birmingham had the ball in wide areas. A new challenge this week after flying wingers against WBA and Leeds, Matty did all of the right things. He’s learning fast and keeping it simple from a defensive perspective. He’s a bit raw but he’s got potential to be excellent in the air. To use a Cloughism; He leaps like a stag. It’s not the first time he’s been deployed at right back and with a good number of Championship games under his belt to assist him, he’s not panicking. HIs experience is starting to serve him well. A 60 yard run with the ball in the last 10 minutes tells you all you need to know about his energy levels. Eventually brought down for a free kick, Joe Lolley wasted the opportunity from a good position. Another solid performance from Matty, he won’t let his shirt go without a fight.

The defence played well as a collective. I can’t remember Muric having to make a save. Worrall and Dawson dealt with the aerial threat of The Juke really well. Nullified. Robinson was equally as as good as Cash, if not better.

Ben Watson did a cracking job in the anchor role and is doing exactly what the manager wants in terms of his positioning and discipline in keeping the teams shape. Using all of his experience in snuffing out danger from the opposition, he’s sitting in as almost a 3rd centre half, allowing our full backs to push high when we have the ball. I reckon Watson is one of the first names on the team sheet at the moment. He is Lieutenant alongside Captain Dawson. They’re going to be key in carrying out Major Lamouchi’s orders. It’s significant. Viva the Red revolution! Be interesting to see how he manages the pair with 3 games in a week.John Bostock will have to be patient and watch attentively from the wings for now. When his opportunity comes, he’ll need to grab it too. It’s good news for Forest.

Speaking of grabbing opportunities, Samba Sow and Sammi Ameobi continued where they left off against Leeds. Sow rightly got man of the match for his tenacity and ability to make things happen. It’s a shame he didn’t get the goal his performance deserved. Sammi had his roller skates on again; a big threat once with his spins and running with the ball. Another one who should’ve got a goal. He is showing what we so desperately lacked last season when Lolley or Carvalho weren’t around. On the pitch, Sammi likes to party. With his wheels in motion, Championship defenders better get ready as he’s coming through!

Not to miss out, Tiago Silva took full advantage of a more subdued performance from Alfa Semedo, coming onto replace him before the hour. Tiago looked confident following his goal in the week and improved our midfield immediately with his passing and terrier like aggression. His corners midweek were top notch and once again; he whipped in another for Michael Dawson to finish. After missing a guilt edged chance at Leeds, Michael owed us that one. Only God knows what Birmingham’s defence were doing to let him have a free run. It was easy. Regardless of any of that though, Forest scoring off corners is a good sign. It was one of the positives from the previous managers time in charge. I’m all for it. Physically we look a lot bigger side this season and with good delivery, it’ll be a great weapon to have in the armoury.

Birmingham to be fair tried to play football and had plenty of the ball but they didn’t pose a real threat all afternoon. Our midfield put the kibosh on any niceties. If it wasn’t Samba Sow breaking up play; it was Ben Watson. If it wasn’t Watson, it was Semedo. When Semedo came off, it was Silva. It was a top ratting performance off the ball! It’s great to watch as an ex-midfield ankle biter (in the days when I could get near the opposition). Considering we’ve lost Jack Colback, Forest look very strong in the midfield department. We were simply too much for Birmingham.

The noticeable difference this week was that whilst it was something good; something bad last week on the ball, the consistency and ball retention was much, much better on Saturday. It wasn’t perfect by any stretch but this was a vast improvement on the first two league performances. Going forwards we seemed to have a wealth of options; with full backs playing high. Ameobi is offering just as much of a threat on the left as Lolley is on the right. A disappointing signing for me on FIFA 19 last October, our manager is getting much more out of Sammi. Funny that.

Lewis Grabban looks a different player after his goals. Amazing what service can do for a striker! He made his header for the 2nd goal look easy; he made the ball do all of the work to gently guide it past Lee Camp. Kenny Burns would have been proud of it, as a former striker himself (before BC decided he was no good at it!).

In all of this, I’ve forgotten about the return of Joe Lolley. He’s been almost absent in the first two outings of the new season but he was back to his best yesterday. If Ameobi was s**t housing the opposition last week, it was Joe’s turn this. A goal and assist against his favourite rivals? It’s getting a bit embarrassing for what he’s doing to Birmingham. You can’t give him that time to line up a shot! His celebration summed it up perfectly after his opener too; a silent gesture of ‘What are you gonna do about it’? Joe continued to rile the Birmingham fans with his play, standing up a lovely ball from the byline for Lewis Grabban to finish, ‘2-0 to the Villa fan’  sang the Lower Bridgford choir. It was getting a bit salty in the stands. The game was ours to lose from that point on.

Pleasingly, we didn’t make it hard for ourselves and it has to be said; we won pretty much at a canter. 6-0 wouldn’t have flattered us. Sow, Ameobi and Grabban all missed sitters. Jack Robinson should have scored or squared his opportunity and Rafa Mir almost got in the act with a scorpion kick! The atmosphere in the Lower Bridgford Y1 had transcended into a full on 90’s disco in the 2nd half; treated to tunes from The Vengaboys and Hadaway (re-written for Ameobi and Lamouchi respectively). By full time, I was in the world of Prince and the New Power Generation as we walked into the afternoon sunshine following an easy win;

We could have fun just strollin,

Like a Little Red Corvette; Forest were flashy in parts. We’d beaten Birmingham in 3rd gear, occasionally slipping into 4th. You can only beat what’s in front of you and whist Birmingham had greater possession, they lacked a cutting edge but any team that loses Che Adams and Jota are bound to feel it. Their new style of play did surprise me somewhat; it was very unlike Birmingham who usually gives us a good bit of rough and tumble. Fair play that they wanted to get the ball down and play. It feels like it might take some time for them but before today, they’d had a reasonably good start.

Anyhow, it’s a good platform going into the next two tricky away games at Charlton and Fulham. I’m intrigued though. I want to know more about the potential of this new-look Forest outfit. Could happiness be just around the corner? The Vengabus stops at The Valley on Tuesday night. Get practicing. ‘He’s Sammi Ameobi, he wears the Garibaldi…’

Team Performance: 7 – Like an afternoon kickabout outside the Sportsman’s Social on Pavillion Road (featured image). If there was to be any criticism; finishing let us down but this was a huge improvement in terms of ball retention and creating chances.

Muric: 6 – A spectator for much of the afternoon. Distribution wasn’t great at times.

Cash: 7 – Another strong outing for the newbie right back.

Robinson: 7 – Back to his consistent best after Leeds.

Worrall: 7 – Looking calm and composed at the back. On this form, I can see why he’s starting ahead of Milosevic et al.

Dawson: 7 – Big performance at the back. Capped it off with a goal. I get a bit sentimental when he scores; I saw him make his debut at 18!!!

Watson: 7 – Very good performance in midfield. Lower Bridgford were singing his name in the 2nd half. If you know, you know.

Sow: 8 – Gangly, untidy at times but boy is he effective. He’s here, he’s there, he’s every flipping where! Deserved MAN of the MATCH.

Semedo: 6 – More subdued performance but still made a good contribution. Seemed to be getting annoyed with himself and his teammates in the 1st half.

Ameobi: 7 – More skills and strong running. Keeps on like this and we’ll be mad not to extend his contract beyond next summer. Feet on the floor though, it’s only 4 games.

Lolley: 7 – Back to his best of hurting teams. His season has officially started.

Silva: 7 – Came on and improved us. Top quality delivery for Dawson’s header.

Adomah: 6 – Did well when he came on and was unlucky not to pick up an assist and a goal with a well hit strike.