Now that the dust has settled a little on the  disastrous end to the season (which we won’t go into now ‘cough- cough’), I’ve gathered some over-arching thoughts on the 2019/2020 campaign from disappoinmtent-hardened Forest fans, Andy WIlliamson and Chris Slack.

How would you summarise the Forest season on a scale of 1/10 (1 – being awful). How do you think it’s gone compared to expectations this time last year?

Andy – It’s hard not to tarnish the whole season with the events of the last five or so games though I’ll try… My expectations were low at the start of the season – I knew nothing of the new manager and have become so used to the merry-go-round I was already wondering who we might point our scattergun at come January. It’s somewhat crazy that ending the season with the manager we started with seems like progress in itself. Finishing seventh? I’d have taken that. Obviously it’s hard to swallow now though – after working so hard to be in the playoff lottery, to throw it away in the manner we did stinks of, um, Forest really. If I’m judging it purely on how I felt at the start of the season it’s a 7/10.

Chris – When Lamouchi took the reins at Forest I had to admit I had never heard of him, either as a player or a manager. The word from those “in the know” was that he was the victim of an unfortunate dismissal at Rennes after elevating them to a Europa League place in Ligue 1. We were told he would make the side difficult to beat and play on the break, winning games by the odd goal but being fairly consistent in his approach and the shape of the side. And so it proved to be. Signings in the summer pretty much kept the theme of unknown quantities going with the likes of Sow, Silva and Samba recruited into the ranks. In all honesty, my expectation level was low, but with the optimism of that the manager and squad could spring a surprise. I’d score the season an overall 7/10. 7th place better than expected but with a customary disappointing finish.

How would you summarise Sabri Lamouchi’s performance in his first season at the club?

Andy –  Lamouchi has impressed me; if I’m honest I wasn’t expecting much, but the way he has worked us into a side that is hard to beat and so often ruthless in the counter attack speaks volumes for him. I don’t believe that is Lamouchi-ball either; I think he very quickly assessed the quality of the squad he inherited and decided that is the only real chance we have of challenging for anything. Smart bloke – pragmatic. He clearly motivates, communicates and organises well, though sadly only well enough to get a bunch of nearly men to finish the season as nearly men once more.  Credit where it’s due though – to set a side up around Ben Watson, with the game-plan of controlling the game without possession takes some balls. He nearly managed it too… though the problem with that game plan is that when you can’t execute it you look like a side that doesn’t create enough. 8/10 with bonus points for Ben Watson, roll-necks under suit jackets and tears before bedtime. I hope he gets another shot. 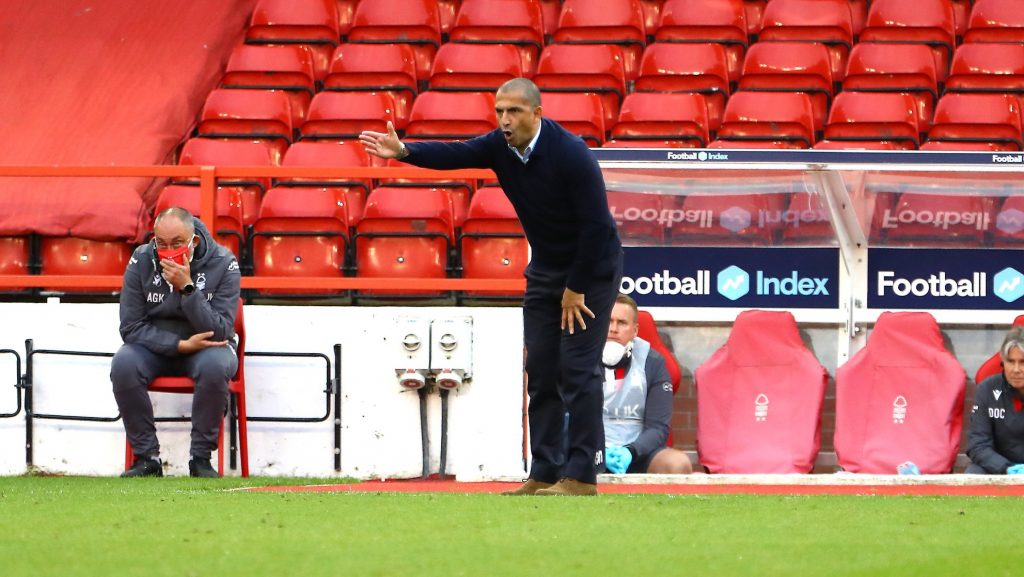 Chris – I’ve bought into what Lamouchi has tried to do from day one. Personally I’m sick of Forest being a soft touch, nice club to play, blow a bit of smoke up our harris to the press and nick the 3 points. Karanka went some way to addressing this but Lamouchi seems to have instilled the players with a steelier, ruthless mentality (certainly pre lockdown). The one weakness in the squad that was glaringly obvious was the lack of depth in the final third. With no real back up for Grabban, and Joe Lolley only firing in fits and starts up until Christmas I genuinely think a 7th place finish was a real achievement given the hit and miss recruitment that we have seen. 7.5/10.

How do you think Forest have fared off the pitch as a football club?

Andy – I’m not so convinced by the steps forward off the pitch – we are certainly better organised than before but that’s like praising a dog for being a dog and not a cat. I believe there is a plan (I haven’t always), though looking at first team recruitment I’m not sure we are investing well enough to get the quality we need if promotion is truly the aim – it’s all a bit half measures for me. I think Grabban has been the only signing in the last few years where you can honestly look at it as a 100%, nailed-on, guaranteed to do well signing – the sort clubs make where you can see they are in it for promotion. It doesn’t have to be crazy money all the time either – but in terms of recruitment the odd Grabban-esq been there, done that and definitely going to do the business would be nice. (Colback would be a start in that regard.)  I suppose if you take the whole global pandemic thing out of the equation we would be investing now from a position of strength. Who knows what the kitty holds at this point though, or how much of the inevitable outgoings we will see reinvested…and really we should have done that better in January, when we were in a position of strength.

Chris – Off the pitch the club seems to be in good hands, with people that know how to run a business. The plans for the stadium and the redevelopment of the surrounding area looked amazing until (and sensibly so) the decision was taken to hold off due to the pandemic. Obviously the issues we have with FFP are still a concern, the last accounts and the losses they showed look bad, but if you are operating at Championship level with ambitions of promotion you’re going to struggle to break even just on the wages of the playing staff. Unfortunately some people can’t differentiate between the club/owner having no money and the parameters set by FFP (profitability and sustainability as it’s now known) limiting what can be invested and spent by an owner. It’s also great to see the club now having a strong relationship with the local media. The social media side is also handled very well, with Forest consistently at the top end of the fan interaction table for likes, comment etc.

Player of the season?

Andy – I can’t really look past Matty Cash – he’s been outstanding at full back and while you can sometimes question the quality (or rather consistency) of his delivery, the sheer amount of work he gets through is at times unbelievable. I thought Darikwa was the best athlete at the club… not anymore. He’s nowhere near the best right back now either – after only a couple of games in the position you knew Cash had made the spot his own. I just hope we don’t pay the bills with Cash. Sorry. Special shouts for Lewis Grabban (who is quite rightly probably everybody else’s player of the season – he’s a terrific footballer), Wozza Joe, and third assistant referee Ben Watson. 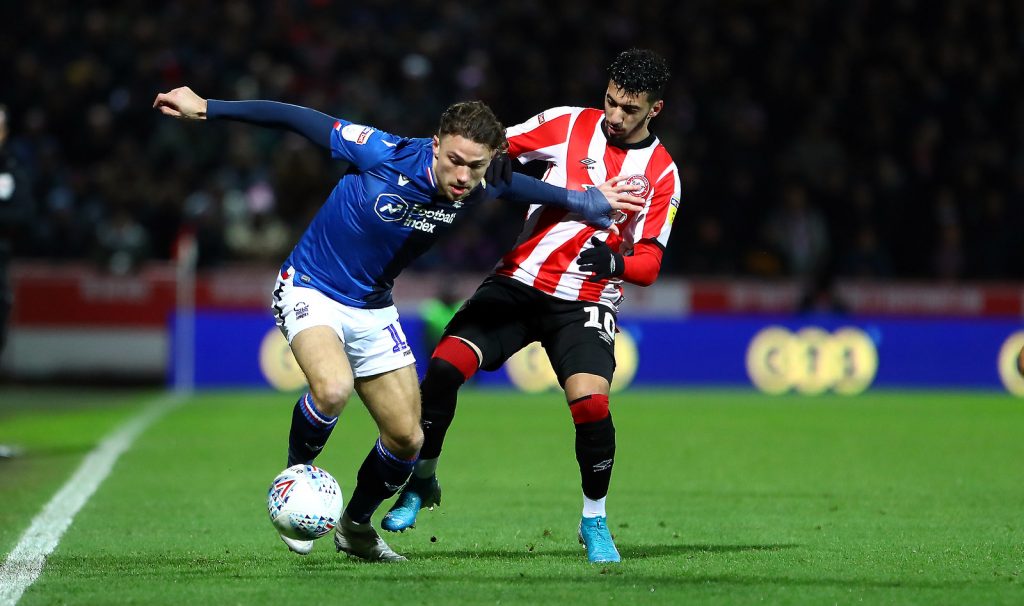 Chris – Matty Cash. Slotting in at right back this season mainly due to Darikwa picking up his knee injury, Cash has improved and excelled right the way through the season. He seems to have found his calling on the pitch and credit must go to both Matty and the coaching staff who’ve worked on this with him. Not only is he providing a threat going forward but I can only think of a few occasions where an opposing winger has really tested him. Hopefully we can fend off the inevitable transfer interest in the close season.

Signing of the Season?

Andy – Brice Samba – big catchy shovel hands, wands for feet and a lovely smile. Best I’ve seen between the sticks for a long while… and he should probably be on free kicks around the box too. 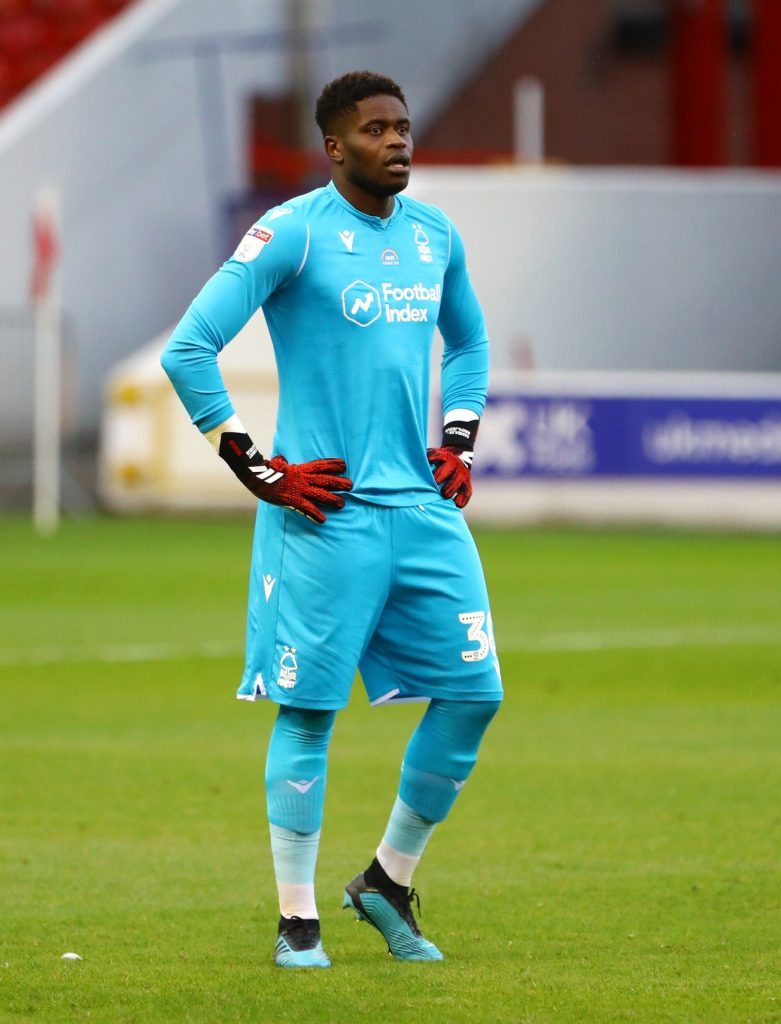 Chris – Signing of the season for me is Sammy Ameobi. Eyes were rolled when he was announced as a Forest player, as well as much online criticism. But Sammy has showed that he has some real talent and has been a huge plus and a genuine bargain, delivering important goals and assists. The extension to his contract he received was well earned and much deserved. 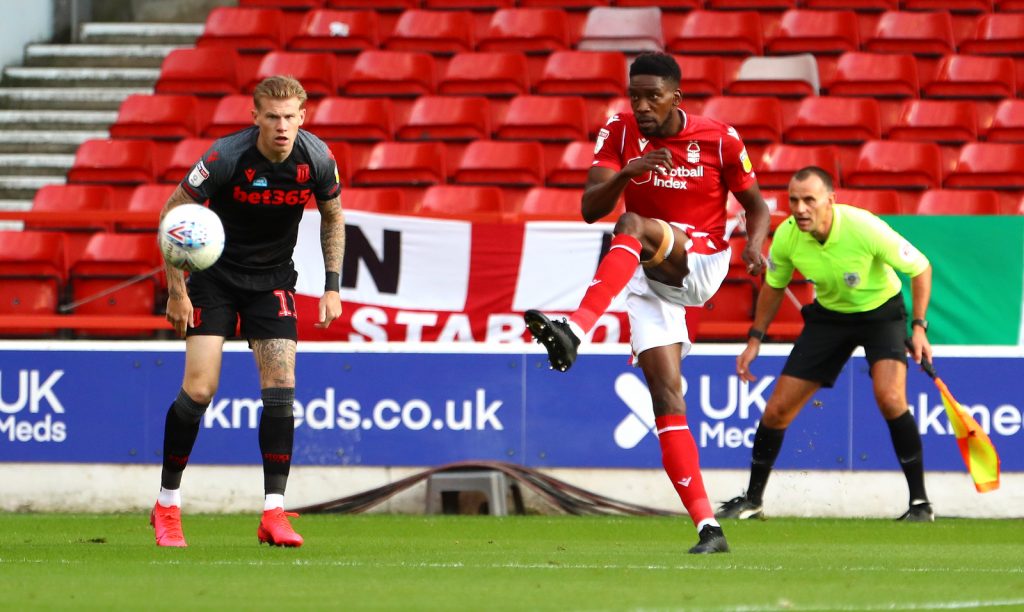 Favourite goal of the season?

Andy – A strange choice perhaps, but there’s something about Grabban’s block the goalkeeper and flick it the wrong way goal against Boro that summed us up as a side. It’s not always great to watch, and there’s quite a bit of shithousing going on, but at times it’s perfect. Like the way the spin he put on the ball bought it back past an irate Pears.  Genius that – I can only really think of one other striker in the English game who might have pulled that mess together into a goal: Lewis Grabban – poor man’s Aguero?

👏 That's some way to Grabban opportunity!

Chris – Lewis Grabban v Fulham. A superb team goal, from front to back, which showed what we can do when everybody is fit and we get the ball on the deck and play. Really was great to watch.

That move 😍
That cross 🎯
That finish 👌

Highlights of yesterday's superb away win at Fulham are now available on iFollow Forest. #NFFC

Most memorable moment of the season?

Andy-  The thing I’ll remember most was watching young Tyler bust a gut to get in position for that tap in against Leeds. Bought a tear to my eye that.

Not a Forest fan I promise, but..

Look at how Tyler Walker and Joe Lolley press Harrison here, despite them being 1-0 up in the 94th minute.

Forest have a special team that give their all and have the ability to play in the Premier League and stay there, they really do. pic.twitter.com/N1du3F7f6b

Chris – Beating Leeds, Brentford or as always Derby. The reason being for all three that the respective fans are so annoying!

If I could grant you a Forest wish for next season, what would it be?

Andy – I’d like to see Sabri get a ton of cash to spend on some real quality, allowing us to play a slightly more expansive game and entertain our way to glory. He can buy some more snazzy hats too and perhaps a cane.

Chris – It would be automatic promotion. No play offs, no drama, just a consistent run to the title. Crushing all opposition 1-0 along the way! Sabri-ball!

Many thanks to the boys for their thoughts – it’s very much appreciated here at Munich and Madrid.