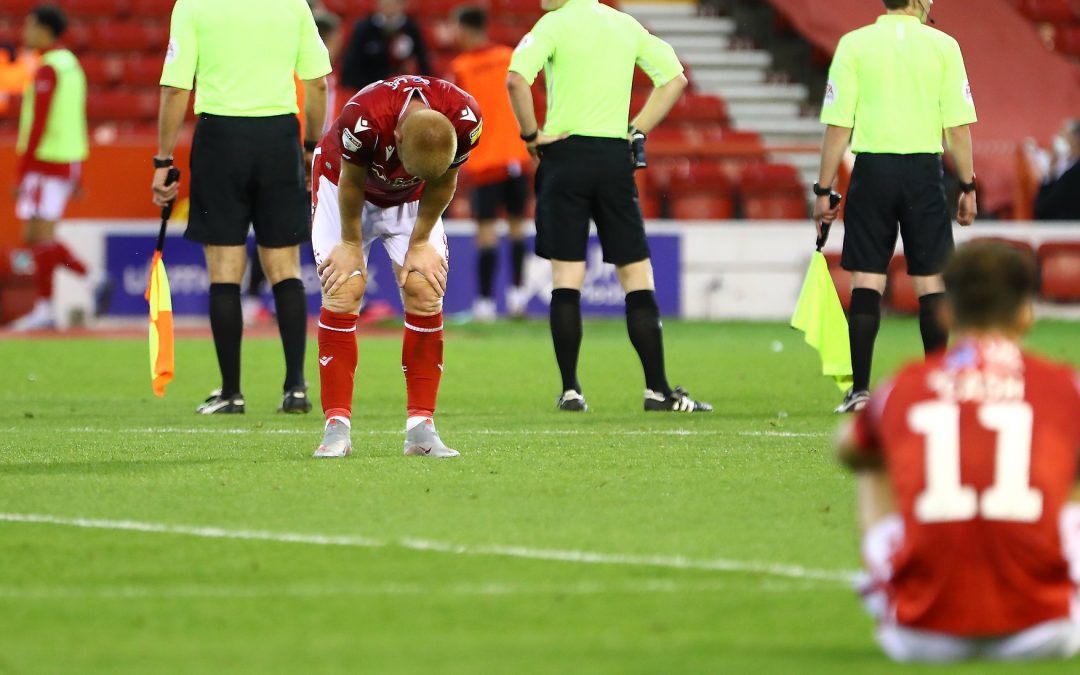 It’s taken me until Sunday afternoon to make some sense of the overwhelming thoughts that have gone through my head since Wednesday evening’s debacle against Stoke that not only ended our season but brought back the painful times of supporting Nottingham Forest in days gone by. Whilst I felt there was a sense of inevitably about it all as we stuttered like a banged out Morris Minor into the final game, watching all of the wheels come off in the final 20 minutes was an almost surreal experience.

There’s no getting away from it, Forest 1 Stoke City 4 can be added to the pile of crippling disappointments I’ve faced over 35 years of following the Reds. The  1992 relegation and subsequent resignation of Brian Clough, Yeovil, Blackpool and Swansea in the Play-offs; this is right up there. The disappointment added with the glee of all those anti-Forest; has been a test in the last few days. I’ve certainly blocked a few numbers from my phone. There is usually a stick to fight back with but on this occasion; there is no stick. The stick has been picked up to beat us with. It wouldn’t have been so hard to take being completely outplayed but when your season’s failure boils down to your own un-doing, it makes it even tougher to swallow.

If truth be told, it had been coming. Sabri couldn’t understand the mentality of Forest doing a Forest as he hasn’t been here to experience it. Well he has now; the true welcome to Nottingham Forest.

For 72 minutes on Wednesday, the players had our destiny in their own hands but once more this season; we threw it all away. There are of course far more important things in life than football but following your football team is right up there as things to look forward to at the end of a working week. It’s the hope that kills you. The hope of this season that we could reach the play offs, the hope that Sabri could take us to the next level of performance and the hope that the players could learn from mistakes that have cost us all season. We should have made the play offs comfortably and this afternoon should’ve been an even more hopeful experience.

Funnily enough, the performance itself was almost the opposite to what I’ve mainly watched at The City Ground all season long; we had plenty of the ball but defensively we were made of glass. Forest started on the front foot, and created a number of clear cut chances that really should have sealed a place in the top 6 by half time. Matty Cash looked more like Matty moving forwards and both Sammi Ameobi and Joe Lolley looked a threat when we pushed forwards. Unfortunately, Lewis Grabban, Ryan Yates and Joe Lolley were all guilty of fluffing their lines when it mattered most. Players win you football matches regardless of the criticism the manager has ultimately faced. The shame is that it shouldn’t have taken this long to take the game to the opposition at home. The manager’s cautious approach perhaps caught up with us in the end; when you have so little of the ball, you have to be deadly when chances do come along. We had a flurry and couldn’t find the back of the net. Performances breed confidence and we were devoid of that when it mattered. 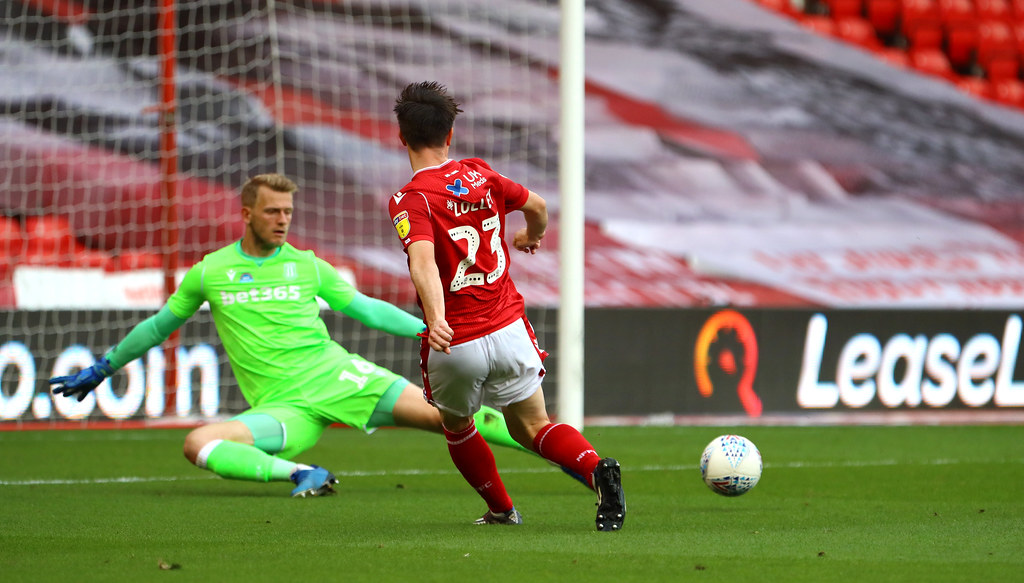 Stoke hadn’t been given the freedom of The City Ground like so many sides have this season and were more than fortunate to be going into the break with a half time lead courtesy of Danny Bath. Stoke didn’t have anything to play for particularly, perhaps just that of sending out a message to their manager that a complete squad overhaul wouldn’t be needed in the summer.

Deservedly, Forest got themselves back into the game with a headed goal from Tobi Figueriedo as we applied plenty of pressure on the Stoke goal; Ryan Yates had been unlucky not to score moments before. With the ball back in our court in terms of a top  6 finish, we simply had to keep Stoke at bay and see the game out. Stoke weren’t exactly plying on the pressure either being content to let Forest have the ball and knock it around. The tempo of the game had been slowed right down by Forest when we should have continued with the momentum we’d built and put the game to bed. Sadly, it’s not Sabri’s style and hasn’t been all season. Perhaps we can see it more than him, if Forest don’t attack – we know that we can’t keep possession long enough to frustrate the opposition. But he should know this of course; ball retention has been a huge issue all season long and so keep ball was not in our best interests. It possibly was the most sensible option, but if you can’t do it then don’t start attempting it during the most important game of the season!

Most unlike this Forest team however was the complete capitualtion in the final 20 minutes that cost us. The last time we’d seen it was in December when Sheffield Wednesday came to town and were 4-0 up by half time. It’s hard to accept for a team that has drawn praise over the season for being hard to beat. Even Chris Kamara doing the Sky coverage looked stunned; Unbelievable Jeff 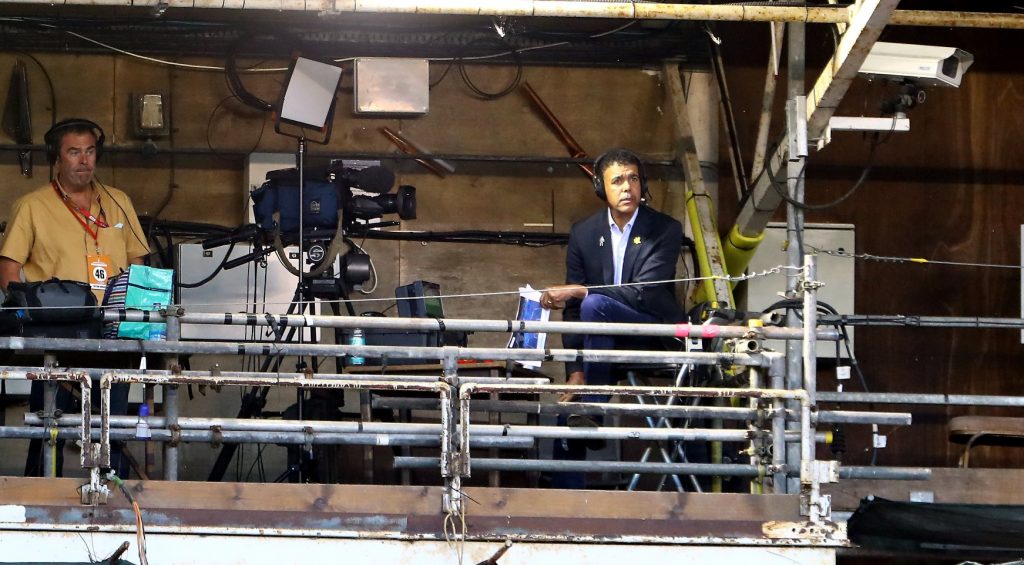 Of course the injury time goals in recent weeks had chipped away at being hard to beat. Defeat to bottom of the league Barnsley and cracked the marble. The opposition have been encouraged to keep going until the final whistle given that Sabri’s team will allow you to have the ball until. The manager has to take responsibility for the results but player errors are unforgiveable.

On Wednesday, the chisel had well and truly broken through Forest’s season the moment James McLean tapped home to put Stoke back in the lead. It was preventable too; Yuri Ribiero needlessly coneding a free kick in the Forest third straight after the drinks break. It was also straight after Sabri had pulled Yuri to once side to get him to concentrate. By his standards, Yuri had a stinker.

It seemed evident that we were blown from the moment that ball had the hit net. Having been dealt psychological blow after blow in recent weeks at Sheffield Wednesday, Derby and Barnsley; I can’t imagine what was going through the player’s heads. Unable to get up off the canvas for a final time, we weren’t recovering from this knockout blow. The season was crumbling before our very eyes and most devastating; it was all of our own doing.

Long before the Stoke game, I’ve lost count over the season where I’ve written about individual mistakes that have cost us, we’ve given too may silly free-kicks away, not taken our chances and that we can’t see games out. If the players cannot learn than ultimately that has to fall on the manager’s shoulders, the warning signs had been there for long enough. A team that cannot learn from it’s mistakes simply won’t achieve in sport. 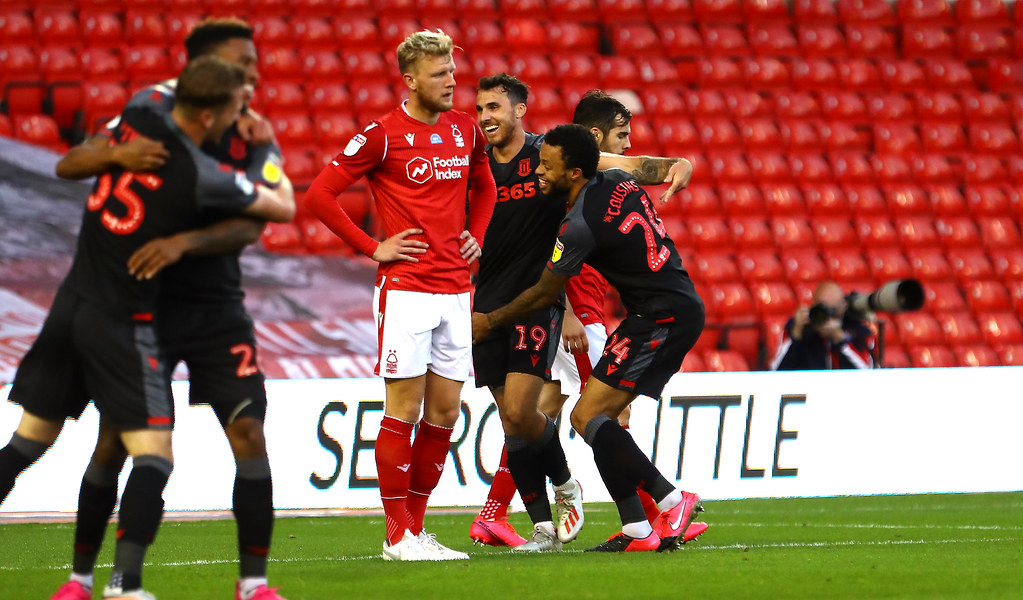 The question now of course; is where do Forest go from here? There’s been deafening silence from the club and although it’s a good sign in some respects that there has been no knee-jerk reaction, an analysis of where things went wrong hardly enamours Sabri to remain in the job. Since the fantastic 2-0 home win against Leeds in early February, Forest have been hanging on the coat tails of their promotion hopes ever since. A dreadful run of performances, form and results inevitably led us to where we are now; mulling over how did it go so badly wrong. Just when we thought the bad times of old were behind us, with a manager lasting the season for the first time in years, the football club are back on the path of uncertain times.  The inquest has undoubtedly begun. Which direction are we to go in?

SMITH: 5 – Thought he might have come for the cross for the initial goal but overall, showed himself to be no better than a back up keeper.

CASH: 6 – Started really brightly but went into his shell.

RIBIERO: 4 – Looked exhausted. In hindsight – he should have come off at the final drinks break.

FIGUEIRIEDO: 5 – Got us back into the game and had dealt with things up until the final quarter.

WORRALL: 5 – Had a decent game up until but looked completely broken after the 2nd goal.

WATSON: 5 – Couldn’t rally the troops when we needed him to the most. Maybe it was the impossible job to revive the players after another knockout blow in the season.

SOW: 5 – Limped off midway through the 2nd half. He’s been a shadow of the player seen earlier in the season. The frequency of injuries are of huge concern with a shorter pre-season before it all starts again.

YATES: 5 – Had a couple of good chances in the game that he should have scored from. Ryan isn’t the finished article but his technical ability was sadly lacking at times.

LOLLEY: 6 – Looked low on confidence and couldn’t believe he opted to square than shoot with first half chance.

AMEOBI: 6  – MAN OF THE MATCH – Probably our best player on the night and carried the biggest threat once more.

GRABBAN: 5 – Should have scored first half but it’s hard to be too critical off his 90 minutes when he’s up against 3 defenders.

SILVA: 5 – We looked a little brighter when he came on but we need him to influence the game more as our most creative midfield player.

DA COSTA: 4 – Struggled when he came on to impact things and unluckily picked up an own goal in dying moments.

MIGHTEN: 4 – Game was already gone when he was brought on.