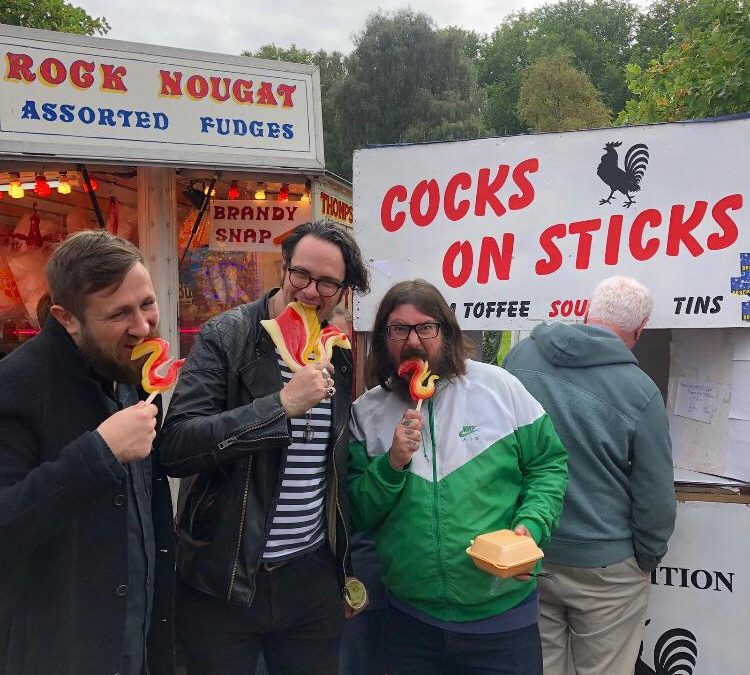 I woke up this morning having had the most amazing (and peculiar dream about Forest). It was one of those dreams where you don’t want to wake up it was so enjoyable. It went a little something like this…

I’d spent pre-match with a group of Brentford fans and getting their take on Goose Fair as they proudly paraded Nottingham’s last ever cock-on-a-stick around a city centre pub. I’d been rubbing shoulders with football social media celebrities Mr.Dore (lovely young man) and Billy ‘The Bee’ Grant–  as we talked about life in The Championship. At The City Ground, we beat  ‘big spending’ Brentford 1-0 and Ben Watson scored a flying volley for the winner to put Forest 2nd in the league. I’d met legendary Forest PA (Radio Nottingham’s) Mark Dennison on the way out of the ground and walking back along Trent Bridge; Forest fans were singing about getting promotion. Twitter was littered with conversations about traditional Forest chants being re-written to reflect a more diverse crowd and Derby fans were texting me about Tom Lawrence being the best thing since sliced bread. Crackers dream right?

And then it dawned on me. This wasn’t a dream. It was in fact; a beer-hazed reality from yesterday afternoon. My day was filled with a massive amount of surrealism that left me wondering if I’d really spent the afternoon in a parallel universe..

He hates the Leicester
He hates the derby
But Forest are magic #nffc pic.twitter.com/zSPYfTNwBQ

I’m desperately trying to keep a lid on expectations but bloody hell, the consistency that we’re picking up results wise is getting a bit alarming. I feel well out of my depth in the waters that Forest are swimming in. The reality is that under Sabri Lamouchi, Forest fans are daring to dream. I’m refusing to get carried away but game by game, my belief is building that maybe Forest can go better than last season’s 8th position. The reason why I won’t be getting carried away is that there’s still much more to come; particularly as an attacking force. We’re a 6/10 team in that respect.

I think that this Forest side is better than Aitor Karanka’s and as a club, we simply cannot mess this opportunity up like they did with the Spaniard. Forest weren’t at their best yesterday but neither did they have to be. Brentford played some excellent football but Forest rarely look flustered throughout the 90 minutes. I’m not sure how Brentford have avoided the ‘Big Spending’ tag this season; they must have some supporters high up at Sky Sports HQ! I previously wasn’t aware that Brentford had spent £30m in shaping their squad for a promotion push over the summer. Granted that they’d recouped 50 odd million in player sales but based on what I saw yesterday, they’re still short up front if they want to be genuine contenders to go up.

Chema came in for Figuerido and I thought that he had a very good full home debut. It was a seamless transition into our back four alongside Joe Worrall. Brice Samba wasn’t really troubled despite making a ‘Weetabix’ save in the first half to keep out Jensen’s deflected free-kick. To a man, Forest players worked their socks off to prevent Brentford from building up a steam. Nothing epitomised the team spirit more than watching Joe Lolley sprint back a full 60 yards to close down a Brentford attack after his dribble had broken down in the Brentford box. Joe had another so-so day for me but you cannot fault that effort and commitment.

I’m running out of superlatives for Matty Cash. I was a big critic of his last season but his conversion to right back really has paid dividends for him and the team. He looked top quality yesterday. Where Forest weren’t great at all going forwards, his energy to raise the tempo of our attacking game from full back was immense. There was a passage of play in the first half where he bombed forward and really took the game to Brentford. This is what I want to see as a supporter on a Saturday afternoon; the bravery and willingness to go at the opposition. In the second half he stood up to everything Said Benhrama had to offer and not only was he breaking up attacks, he was charging forwards at any given opportunity. It was as good as I’ve seen Matty play.

Similarly, it was Thiago Silva’s best game in a Forest shirt too. He did more of the simple things this week than trying too hard and he was close to winning a penalty before nearly seeing a free kick hit the back of the net towards the end of the first half. He seemed to be in the right places at the right times and almost capped his performance with getting a second goal, his shot fizzing just past the post.

Last but not least, I come on to Ben Watson. The level of performances that Ben is putting together week in/week out for Forest at the moment is nothing short of incredible. The manager has found a way of adapting his game where not only is he managing the Tuesday/Saturday demands of The Championship; Ben is topping the player ratings chart. This was his third man of the match performance in his last four league games. He has scored the winning goals in two of those games. It’s absolutely bonkers. He was here, there and everywhere yesterday; playing with a tremendous amount of composure. Take nothing away from that volley, it was controlled technique to rifle Joe Worrall’s deft header back into the Brentford net. The City Ground erupted and I’ve not heard noise like that since Benalouane scored against the sheep last February.
At the final whistle, the players and staff showed great togetherness and what this means. The embraces between unused subs is a joy to see. Joe Worrall doing his best psycho impression told you everything you need to know about what the club means to him. Its great news that he’s committed his longer term future to Forest.

The only black spot was the injury to Samba Sow and hopefully the hamstring injury won’t be too bad. I’m not sure if I’m the only one in thinking that the omission of John Bostock is a bit of a strange one so far; he’s barely had a look in. Part of me feels that if he’s not doing enough to impress the manager then there is a ginger haired lad at Newcastle kicking his heels for first team action in January. He’d be a cracking addition for the rest of the season on loan if we’re still around the top 6 at the turn of the New Year.

Where to fit Joao Carvalho into the team remains a bit of a conundrum in suiting both the player and the manager’ set up. Whilst this is a very farfetched comparison, it feels a little like the Scholes, Lampard and Gerrard situation for England a few years back. There were only two places up for grabs in that midfield but they were all too good to leave one of them out. It was detrimental to the teams shape to go with all three but England did it without ever achieving great success. Whilst Joao remains out on the left hand side, I don’t think that he is as effective of Sammi Ameobi out there. It’ll be interesting to see how this pans out….

SAMBA – 7: Ice cool once more in goal. Another clean sheet.

RIBEIRO – 6: Offered an attacking threat down the left.

CHEMA- 7: Excellent debut. He’s been at Forest for years. Right?

SOW – 6: Similar to Blackburn, slightly under par but a menace for Brentford.

WATSON – 8: Got the winner once more. Superb performance. Man of the match.

CARVALHO – 6: At the heart of connecting play further up the pitch but this was one of his quieter games.

SILVA – 8: Super game in midfield. His best in a Forest shirt.

GRABBAN – 6: Seemed a little off the pace yesterday.

ADOMAH – 6: Spot on in game management. What he’s lost in pace, he’s gained in know-how.

AMEOBI – 6: Came on and contributed in the final 10 minutes.