It was a slightly surreal build-up to the Derby game on Friday evening as I sought to compensate the live experience with my own mini-stadium atmosphere in the absence of a prematch pint and the usual inspirational Forza Garibaldi display at The City Ground.

With my Forest playlist on in the background and homemade Gyros marinating in the fridge (with Evangelos too far away for a takeaway bite), I listened to those pre-match bangers from over the years including Pjanno, Born Slippy, Lose Yourself and of course Mull of Kintyre.

The prematch team news added to my anticipation that if there was ever a time to beat Derby then this would be it. With two strikers upfront with Harry Arter in midfield, there was a sense that Chris Hughton was going for it. I refused to listen to myself as to not to burst the prematch excitement; ‘Scott – the last time 4-4-2 was used at home was under Martin O’Neill in a 2-1 defeat to Bristol City where we got played off the park’. Imaginary fingers were in ears as I cranked up the volume.

With no Derby fans to taunt from my usual seat in Lower Bridgford Y1, Whatsapp voice messages were exchanged between myself and a Derby fan friend of mine, which wasn’t quite the same but it would have to do

The purists will know what I’m on about but it was good fun nonetheless as we both went through the repertoire of anti songs as kick-off drew closer.

In fairness, I’d really whipped myself up into a decent frenzy only for the reality to hit home that behind closed football really isn’t the same particularly on Derby day at The City Ground. I’d let the hype get to me. As a 42-year-old, you’d think I’d know better by now. It’s always the hope that kills me supporting Forest.

It didn’t take too long to register that once proceedings got underway, the much muted 4-4-2 formation left us looking very flat and struggling to adjust which played into Derby’s hands somewhat. The Rams certainly looked the more comfortable of the two sides in the opening half and it was a little reminder that whilst yes, we are playing catch up after a terrible start to the season, with so many new faces, Chris Hughton’s men are going to have to learn how to walk before they can run. Patience is a virtue after all.

We’d not gotten off to the best of starts with the ball, and to their credit, Derby looked the far brighter of the teams even without talisman Wayne Rooney available to them. Pantomime villain from last season, Tom Lawrence looking dangerous when in possession, and the last thing we needed to do was concede whilst trying to get a foothold in the game.

Forest had already had a let-off as Samba saved well from Shinnie’s left-footed strike following some unconvincing defending from Cyrus Christie and with Derby finding their rhythm early on, it was paramount that Forest stayed in the game. 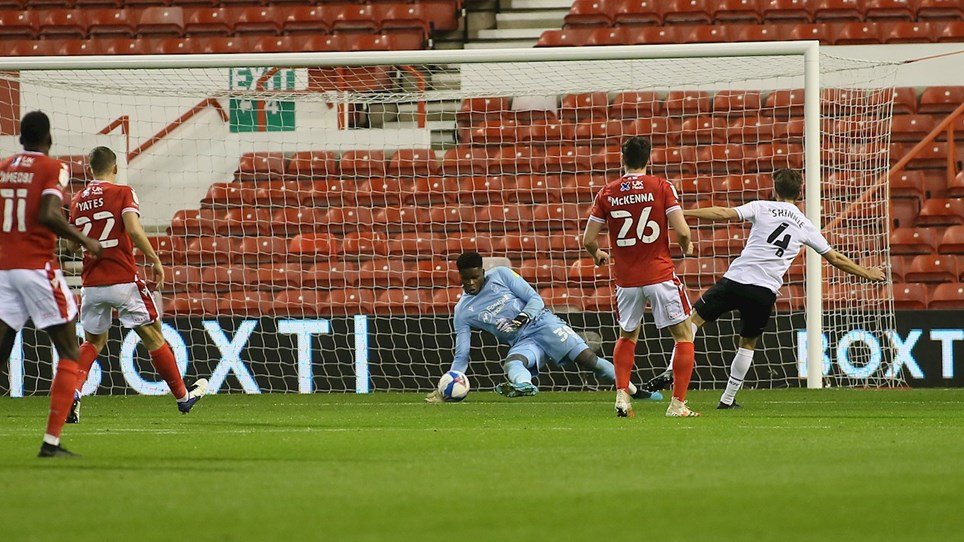 It was quite the setback then as Derby opened the scoring just before the half-hour mark through Martyn Waghorn. Sammy Ameobi was adjudged to have fouled Jason Knight in the build-up when both Christie nor Yates dealt with Jozwiak down the Forest right. There didn’t look to be too much in the challenge but with young Knight yelping out in pain and clutching his ankle, it was a well-won free-kick when Ameobi looked almost speechless at the ref’s decision.

Waghorn still looked a long way out from goal so it was some hit to see the ball ricochet in off the underside of the bar from a full 25 yards out. Following the replays, Brice Samba was criticised for his positioning and whilst Waghorn couldn’t have done much more with his bit, that last moment lean-to Brice’s left, made it that much more difficult to recover and tip over a shot that was more central to the Forest keeper’s goal than right in the far corner.

With Forest then being forced to chase the game a little before half time, we nearly got caught out on the break once more and were fortunate not to be two goals behind, only thanks to a great save from the redeemed Samba. Tom Lawrence, who continued to menace, broke well from the Derby half and although his cross should have been easily dealt with by Tobi Figuererido, the Portuguese centre half got his header all wrong and could only prod out to Derby full-back Nathan Byrne. His clever pass put Shinnie through on goal but the Scotsman’s shot was well saved by Samba. Although Shinnie will feel he should have done much better, Samba’s save had kept Forest in it and gave Hughton’s a slightly easier team talk at the interval.

Thankfully, Forest looked far better in the second period and with Lewis Grabban forced off with a hip complaint (looked to be struggling from early in the game), Anthony Knockaert’s debut in a red shirt was more than encouraging.

Knockaert looks an upgrade on what we already have but his enthusiasm to demand the ball and create something was very refreshing to see and his performance really swung the pendulum back into Forest’s favour. With Lolley deployed in the No.10 role, he too had a better second half and Hughton will have been pleased with his side’s response.

A whipped in cross from Knockaert was almost too good as it moved too quickly for both Taylor and Ameobi to connect with. We didn’t have to wait too much longer however as Knockaert’s next corner, fell to Lyle Taylor off the back of Ryan Yates, and he swivelled to smash the ball home for Forest’s equaliser and open his account for the Reds. Whilst it did look like Yates might have been fouling Curtis Davies (who really should have played to the whistle instead of claiming) and Derby remonstrated that Scott McKenna was in an offside position (the irony) but who cared? Forest were right back in it. 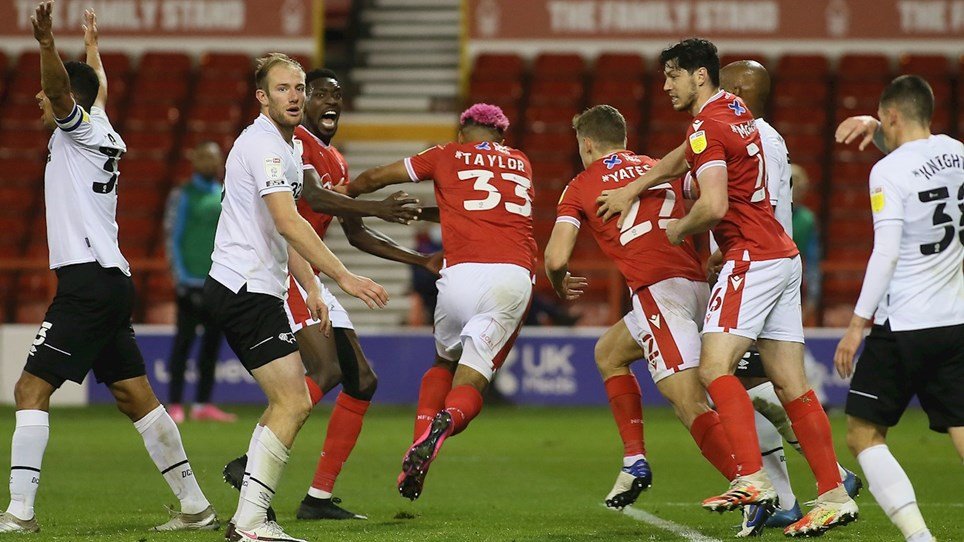 With Knockaert really grabbing the game by the scruff of the neck, it felt like we were in pole position to go on and win things. Colin Fray raised a great point in his post-match interview that with a full City Ground, it may well have been a game that the atmosphere would’ve encouraged Forest to find another gear and take all three points. Unfortunately, it wasn’t to be the case and at the end of proceedings, it was Phillip Cocu that bemoaned his side being robbed of all three points as Kamil Jozwiak’s goal was ruled out by a very late flag from the (Forest?) linesman.

So the goal. Should it have stood? At the time and following countless replays, I thought it should have as Waghorn wasn’t directly in line with Jozwiak’s shot. However, Waghorn’s tweet after the game, complete with an image made me think a bit differently. If you look at the linesman’s angle from the photo, Waghorn appears to jump over the ball and is therefore interfering with play and offside. Only Waghorn will know why he jumped over an imaginary ball nowhere near him.  He’s as much to blame for the goal being chalked off and denying Derby another famous victory at The City Ground minus Wayne Rooney.

“I prefer not to speak, if I speak I’m in trouble” pic.twitter.com/05Wa3vckqc

All in all, a draw seemed fair result at the death despite my disappointment that we’d not managed to get a win. Michael Johnson and Viv Anderson falling out on the pundit’s sofa only added to my irritation.

Despite the disappointment at the result, and on an assessment of Chris Hughton’s first week in charge (on the pitch), things haven’t gone too badly and the first objective, to stop the rot has been achieved. We’ve scored a goal in every game and certainly look more potent than before going into the international break. I think my overarching concern is that this is going to take a bit of time to sort out.

We’re yet to find a system that completely suits and the defensive capabilities of both full-backs being left exposed is a slight worry. Without a Ben Watson type to provide that same level of defensive know-how from midfield, I’m sure things will continue to be tweaked both home and away. There is no doubt that both Cyrus Christie and Nicholas Ionnau look better in the opposition half and maybe I’m old fashioned but even in the modern era, I think both have to defend better than what they have in their last two outings.

I can’t complain about team selections however and feels like we are playing with more purpose to attack. I’ve lost count of how many times I’ve heard Hughton demand that we pass the ball quicker from the touchline. There’s still a degree of fragility under the surface and this is going to take more than three games to instil greater confidence. With a stronger sense of belief, Forest can really turn their fortunes around given the proven quality now at our disposal. Winning games is the ultimate boost and the season’s success really is in our own hands to a large degree.

It was great to see the pink-haired Taylor off the mark in a Forest shirt and with Lewis Grabban still struggling without a goal, it feels like he has a real opportunity to have a run as the first-choice striker. Considering, Taylor has not played much football in the last six months due to injury, choosing not to risk a reoccurrence of that at Charlton with his contract expiring and only getting his first start on Friday, it is hoped there is still a lot more to come.

With Sammy Ameobi, Joe Lolley, Luke Freeman, Anthony Knockaert and possibly even Grosicki to come also next week, it’s an embarrassment of riches. I can’t think of many other times when we have had so many forward players to choose from. It’s even better than Lewis Grabban will be staying at Forest too for the time being. Lewis will come good, I am 100% sure of that.

Despite the riches on paper, the challenge now lies within and on Chris Hughton’s shoulders. We all know on paper, that this Forest side should be competing comfortably in the top six but there’s a lot of hard work required to bring it all together in terms of system and squad harmony.

Whilst things have been much improved in the latest round of games, the fanbase needs to remain patient as this is not going to be an overnight job. Rome wasn’t built in a day and the man who wasn’t on that particular job is sadly no longer with us to cast his eye over things. So for now, I’ll be keeping my expectations in check. Don’t believe the hype (just yet).